Retinopathy of Prematurity (ROP) is a fibrovascular proliferative disorder, which affects the developing peripheral retinal vasculature of premature infants. It is an avoidable cause of blindness in children.

The initial signs of ROP are detectable by a few weeks after birth, and the condition progresses rapidly thereafter. This means that screening has to be timely, and there is only a very narrow window of opportunity for treating. If not treated, the condition progresses rapidly to Stage 4 or 5 in approximately 50% of babies. The visual prognosis for babies with Stage 5 disease (total retinal detachment) is very poor, even after complex vitreoretinal surgery. The primary goal of screening is to detect all babies with treatable disease in time for treatment to be effective.

In the normal foetus, vascular development of the retina occurs in two phases.

It occurs from 8-21 weeks of foetal development. Spindle cells (mesenchymal precursor cells) appear around optic disc region. Then cords of spindle cells advance towards ora serrata which differentiate into capillaries which subsequently develop into arterioles and venules. Phase 1 is not under the control of Vascular Endothelial Growth Factor (VEGF)

Pathologic Angiogenesis (ROP pathogenesis): When child is exposed to high oxygen after birth there is down regulation of VEGF. This leads to vaso-obliteration & cessation of vessel growth. When oxygen exposure is reduced there is a pathological release of VEGF from now larger avascular retina that leads to neovascularization

Thus, changes in local tissue oxygen level are believed to be important to normal retinal vascular development through the effect of growth factors. If VEGF production persists then the ROP will progress. But if VEGF levels decrease then regression of ROP can occur

No consensus is present on which of these criteria should be used, either alone or in combination for the screening of ROP.

When to screen? When should a pediatrician refer to the ophthalmologist for ROP screening?
Ideally, babies are to be screened at 31 weeks postconceptional age (gestational age + post natal age) or 4 weeks after birth, whichever is later.1 However, an easier way to remember is that thefirst retinal examinationshould be doneby first monthof life.

Whom to screen?
Screening all premature babies will be a waste of time, as we know that all do not develop ROP. UK guidelines state that babies with gestational age (GA) £ 31 weeks or birth weight (BW) £ 1500 g should be screened for ROP. USA guidelines are GA £ 30 weeks or BW £ 1500 g. We cannot follow the western screening guidelines as in the Indian scenario we still see bigger babies getting severe ROP. So, for the Indian scenario all babies having GA £ 35 weeks or having BW £ 1800 g should be screened for ROP. Apart from this, babies that fall outside the screening guidelines but have a rough course in neonatal intensive care unit (NICU) should also be screened at the pediatrician’s discretion. This is called “sickness criteria”.

How to screen?
A retina specialist or a pediatric ophthalmologist does screening. It is done with the help of indirect ophthalmoscope, 28 D lens, scleral depressor (wire vectis) and alphonso speculum. 0.5% proparacaine drops are used for topical anesthesia and half strength tropicamide plus (0.4% tropicamide with 2.5% phenylephrine) is used for pupillary dilatation. Recently, a new digital camera, Retcam, is available for screening but is a very expensive tool. It is the duty of the pediatrician to call these trained ophthalmologists to their NICU or they should refer the children to themat the end of the first month. ROP screening should be included as a part of neonatal care. Examinations via binocular indirect ophthalmoscope for ROP are difficult and require doctors with specialized paediatric retina training. Moreover hand drawn sketches are the only means of documentation for infant retina, which has its own disadvantages.

RetCam is a digital camera for imaging the retina of infants. It is a mobile self-contained system that can move easily around the hospital or office. It provides state-of the art wide field pediatric retinal imaging (130 degrees). It has instant & accurate documentation, avoiding time-consuming retinal drawings
In just a few minutes one can do an entire exam and the images are stored permanently on a 9.4 GB DVD. It allows easy accessible imaging even by non-ophthalmologists (NICU nurses) and also allows the transmission of these digital images to centers where ROP expertise is available via telemedicine. It provides 24-bit color, mega-pixel digital images, presented on a 17- inch computer monitor available for printout or electronic transmission. Thus it serves as a good teaching tool for others. Comprehensive database keeps track of each image, session and patient allowing for later side-by-side comparison of the case images. FFA can also be done. Newer Retcam II & III have the same features but with a flat screen monitor. Retcam shuttle is laptop based.

Disadvantages of Retcam:Imaging of infant retina till ora in not possible without scleral depression and it is a very expensive tool.

An international classification of retinopathy of prematurity was published in 1984 and updated in 1987 and 2005.2-4 The components of classification is as follows.

Location of disease:Each eye is divided in three zones to define the exact location.

The extent of disease:In the form of no. of clock hours involvement (Figure 2) Figure 2: Schematic diagram of right eye (RE) and left eye (LE) showing zones to describe location of disease and clock hours to describe extent of ROP.

Staging of the disease is done according to degree of vascular changes. Each stage is defined by its location in zone & extent in clock hours for documentation.

Stage 1 – Demarcation Line:This line is a thin but definite structure that separates the avascular retina anteriorly from the vascularized retina posteriorly. The demarcation line is relatively flat, white, and lies within the plane of the retina (Figure 3). Stage 2 – Ridge:The ridge is the hallmark of stage 2 ROP. It arises in the region of the demarcation line, has height and width, and extends above the plane of the retina (Figure 4). Stage 3 – Extraretinal fibrovascular proliferation (EPF):EPF or neovascularization extends from the ridge into the vitreous. It is continuous with the posterior aspect of the ridge (Figure 5). It is further subdivided into mild, moderate or severe depending on the extent of EPF infiltrating the vitreous. 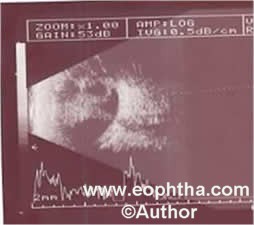 Aggressive posterior ROP (AP-ROP):An uncommon, rapidly progressing, severe form of ROP is designated AP-ROP. If untreated, it usually progresses to stage 5 ROP. The characteristic features of AP-ROP are its posterior location, prominence of plus disease, and it does not follow the stages mentioned above(Figure 8). It is observed most commonly in zone I, but may also occur in posterior zone II.

Plus disease:It is an additional sign indicating the severity of active ROP. This includes increased venous dilaattion and arteriolar tortuosity of the posterior retinal vessels (Figure 9) and may later increase in severity to include iris vascular engorgement, poor pupillary dilatation (rigid pupil), and vitreous haze.

Pre-plus disease:It is defined as vascular abnormalities of the posterior pole that is insufficient for the diagnosis of plus disease but demonstrates more arterial tortuosity and more venous dilatation than normal. How to treat?
The principle is ablation of the ischemic peripheral retina stops the release of angiogenic factors. Two options are available: Laser or cryotherapy can only be done till stage 3 ROP. Management of stages 4 and 5 is the surgical and the final outcome is very poor for these stages.

ROP management doesn’t end with laser or surgery. Once treated, lifelong follow-up (yearly) is mandatory. All other premature infants irrespective of having ROP yearly follow-up till the age of 5 years is advisable to rule out refractive errors (most common), squint, and amblyopia.

Role of anti-VEGF injections in ROP: