Ten Tips for Management of Nystagmus Nystagmus is defined as an involuntary rhythmic oscillation of one or both the eyes. Clinical assessment and eye movement recordings are important to diagnose and classify nystagmus. It is essential to have patience while examining a child, as anxiety often increases nystagmus. Table 1 Classification of nystagmus according to CEMAS.

2. The mechanism for stable eye movements

Three mechanisms help in preventing the deviation of line of sight from the object of regard. First is ‘visual fixation’ in which the visual system can detect retinal image drift and program corrective eye movements to suppress the unwanted saccadic movement. Secondly, ‘Vestibulo-ocular reflex’ compensates for head rotations and the third is ‘gaze holding system’. This consists of a“neural integrator system” that changes the resting firing rate to the extraocular muscle to overcome the viscoelastic forces of orbit and maintain a position of eccentric gaze.

Disorders of an afferent visual pathway or the visual-motor calibration system result in nystagmus such as acquired pendular nystagmus of the blind eye and seesaw nystagmus in parasellar lesions. Disorders of the vestibular system could arise in the periphery, which consists of mixed horizontal-torsional nystagmus and can be attenuated with visual fixation. Central vestibular nystagmus is usually vertical and does not attenuate by visual fixation. Acquired periodic alternating nystagmus is due to disinhibition of central velocity related functions mediated by the cerebellum. Neural integrator consists of nucleus prepositus glossi-medial vestibular nucleus for horizontal eye movements, interstitial nucleus of Cajal for vertical gaze and flocculus of the cerebellum. Disorders of these structures impair the ability to hold eccentric gaze and results in gaze-evoked nystagmus. Oscillopsia is experienced by patients of acquired nystagmus and is usually absent in congenital nystagmus, except in cases of decompensated strabismus and progressive retinopathy. 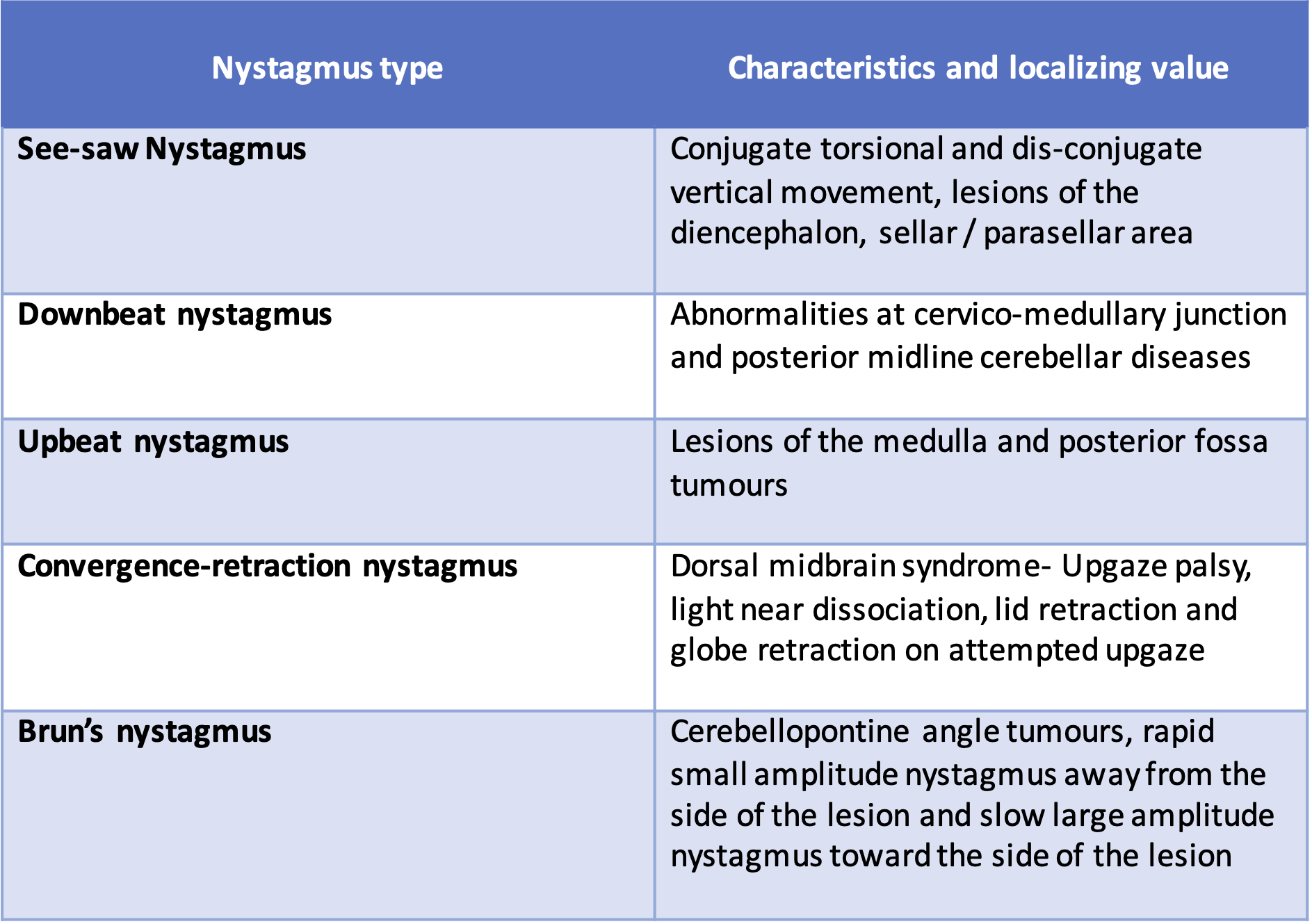 An extensive history, including onset, familial history, birth history and developmental milestones is to be elucidated. Look for abnormal functional components of vision such as photophobia, nyctalopia and delayed visual development. The following have to be kept in mind while seeing a patient of nystagmus. These evaluation points become more important when motility recordings are not available and the onus of diagnosing nystagmus is on clinical examination only.

A single most important step in managing all nystagmus is performing cycloplegic refraction and prescribing appropriate spectacles. Bifocals should be added if hypo-accommodation is present. If convergence dampening is present in patients of INS without strabismus, add 7 diopter base-out prisms in front of each eye with over-minus glasses (-1 sphere). The use of contact lenses that provide exteroceptive feedback also reduces the intensity of nystagmus.

Botulinum toxin injection helps in reducing nystagmus and improve vision in some patients but it acts for a short period and is associated with ptosis. In cases of oscillopsia, retrobulbar injection of Botulinum toxin has been attempted with limited success. Clonazepam and Baclofen have a proven role in treating central vestibular (upbeat and downbeat) nystagmus. Periodic alternating nystagmus has shown improvement with Baclofen (5-10mg TDS). The most effective treatment of acquired pendular nystagmus (associated with disease of central myelin) is Gabapentin and Memantine.

The NAFX documentation could allow the physician to estimate the percentage improvement from intervention and make an informed decision about its therapeutic efficacy.

The purpose of extraocular muscle surgery in nystagmus is to center the preferred position of the eye and to improve the oscillation’s beat-to-beat characteristics. Cüppers proposed that in cases of observable convergence dampening with good binocular function, artificial divergence can be created surgically. A bilateralmedial rectus recession of 3mm is done to induce convergence. However, the proportion of INS patients in whom this two-muscle surgery is indicated are small. In the absence of a null zone, abnormal head posture, strabismus or convergence null, patients can benefit from tenotomy and reattachment of all four horizontal muscles. This involves enthesial tenotomy, dissection and reattachment at its original insertion. This procedure results in higher peak NAFX values probably through alteration of the proprioceptive tension-control loop.

Abnormal head posture (AHP) can present as head Turn in cases of eccentric horizontal null position, Tip-up and tip-down (Chin up and down) or head Tilt in cases of torsional null(3T). In cases of a head turn of 15-20°, Anderson's yoke muscle recession can be done while in larger angles Kestenbaum-Anderson’s procedure involving recess-resect of all four horizontal muscles is done. In cases of chin-up posture depressors of the eye (superior oblique and inferior rectus) are weakened while elevators (inferior oblique and superior rectus) are weakened to correct chin down posture. Head tilt is corrected by surgically rotating the eye in the direction of the head tilt. This can be achieved by either operating on oblique muscles or horizontal transposition of vertical muscles or vertical transposition of horizontal muscles. Figure 2 Chin down &Chin up posture In cases of FMNS, it is beneficial to move the eye in abduction to correct esotropia as adduction innervation is required to maintain fixation that dampens the FMNS by taking advantage of Alexander’s law. Nystagmus blockage syndrome is benefited from bimedial recession procedure in type I and performing surgery to straighten the eyes in type II.