It is a congenital ocular disorder where fetal vasculature persists. It can be either subtle (no disturbance in vision) or severe (profound visual loss)

The fetal vasculature is composed of two parts:

During development blood flow to the eye is through hyaloid artery. At the 240-mm stage (seventh month), blood flow in the hyaloid artery ceases. Hyaloid vascular regression occurs in following manner: Pathologies of the Primary Vitreous1 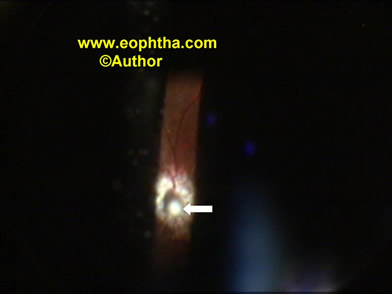 As mentioned earlier, it is a congenital ocu­lar disorder in which fetal vasculature does not regress. It is unilateral approximately 90% of the time. No single gene has been identified. The new terminology for Persistent Hyperplastic Primary Vitreous(PHPV) is Persistent Fetal Vasculature Syndrome (PFVS).5 PFVS emphasizes not only the importance of both anterior tunica vasculosa lentis and posterior persistent hyaloid system but also represents the spectrum of structural changes which can present within the eye.

There are three types of PFVS:

It has predominant features of persistent anterior tunica vasculosa lentis without much or any posterior hyaloid component. It has predominant features of persistent posterior hyaloid artery without much or any anterior tunica vasculosa lentis. Associated diseases
Other systemic associations have been reported with PFV syndrome, most often in association with central nervous system problems 9. However, many of these reports do not rule out mutations in the Norrie disease gene. Associations have also been reported with oculo-palatal-cerebral syn­drome 10, intrauterine herpes simplex virus infection 11, intrauterine exposure to clomiphene, oral-facial-digital syndrome, anterior and posterior colobomas or even cystic globes 12,13 and tuberous sclerosis.14

The severity of anterior segment appearance, globe size, severity of lens in­volvement or vascular appearance does notpredict the amount of retinal dysplasia, which in turn often determines the eye's visual result. Retinal dysplasia can be divided into macroscopic and micro­scopic types.Macroscopic dysplasiais defined as changes eas­ily visible with the operating microscope or indirect oph­thalmoscope.Microscopic dysplasiaoccurs at the cellular or vascular level. Although at present we have no way to deter­mine cell dysplasia, vascular dysplasia can be assessed by flu­orescein angiography. An example of vascular dysplasia is the lack of a capillary-free zone. This finding can be missed with­out angiography and might account for some of the poor vi­sion after successful surgery. Visual evoked potential testing may be useful in predicting retinal dysplasia.7 If a response is present, then it can be helpful in the decision whether to recommend surgery for retinal detachment. This is most helpful when the other eye is uninvolved, and the waveforms can be compared.

B scan ultrasound 15: Echography usually shows a shorter than normal globe, although it may be normal in some patients. The lens is often thin and there may be irregularity of the posterior capsule. A retrolental membrane can sometimes be demonstrated. A vitreous band (persistent hyaloid vessel) may be seen extending from the posterior lens capsule to the optic disc. Very often this band is extremely thin and difficult to identify along its entire course(Figure 6). In other situations, it can be extremely thick and easy to demonstrate. Sometimes a tractional retinal detachment can be seen posteriorly which can help to differente vitreous band from a closed funnel retinal detachment. The problem associated with PFVS can be divided into two components that affect vision: the media opacity and retinal changes (both dysplasia and traction). Media opacities are treated similarly to that of congenital cataract that is by lens removal, refraction and amblyopia management.