Introduction
Rhegmatogenous retinal detachment (RRD) although rare, it is a serious ophthalmic condition that can lead to significant loss of vision or blindness without timely and appropriate management. It has been nearly a century (1918) since Jules Gonin demonstrated the importance of localizing and sealing retinal breaks, a procedure termed ignipuncture.1 Scleral buckling techniques, introduced by Custodis2 and refined by Schepens and later Robert Machemer’s pars plana vitrectomy, revolutionized repair of RRDs. Pneumatic retinopexy introduced in the mid 1980s allowed treatment of retinal detachments as an outpatient procedure in selected retinal detachments 3 Above techniques either alone or in combination has resulted in surgical success rates close to 90%.

For most surgeons, choice of surgical procedure for primary retinal detachment will depend on the individual clinical situation combined with each surgeon's experience; bias and comfort level with a particular procedure. Recent advances in surgical instrumentation, wide angle visualization, and the use of various intra-operative tamponade agents have made vitrectomy procedures safer and preferred treatment by the surgeons. There is less exposure to scleral buckling for vitreo-retinal surgeons in training and younger surgeons may ultimately prefer vitrectomy as a first choice for repair of retinal detachments. Scleral buckling however still has relevance to this day, but without a randomized clinical trial comparing the 3 modalities, and in various clinical scenarios, definitive answer as to which procedure is superior will be impossible.

Basic Rationale of repair of RRD
The regardless of the procedure chosen, the surgery aims to identify and close all the retinal breaks with minimum iatrogenic damage. Break closure in retinal detachment would involve two steps. First, is to bring the edges of the retinal break into contact with the underlying RPE which is achieved either by bringing the eye wall closer to the detached retina (a scleral buckle) or by pushing the detached retina toward the RPE (intraocular tamponade with a gas/PFCL(expand) bubble). The second step would be to create a strong chorio-retinal adhesion around the breaks; this may be accomplished with cryotherapy, laser photocoagulation or diathermy. Scleral Buckling:
Scleral buckles usually are made of solid silicone and silicone sponges. They can either be used as explants or as implants. Explants are the most commonly done procedure where the buckle is sutured to the sclera while in the implant technique they are placed in the bed of the dissected sclera. Scleral explant procedure was initially described by Custodis 2 which Lincoff later modified 8 while the implant method was popularised by Schepens 9. Both the above techniques have the following steps in common

A. Cryotherapy vs laser photocoagulation

In a randomised clinical trial by Lira et al 39 in eighty six patients with uncomplicated retinal detachment, both techniques of retinopexy were shown to have satisfactory anatomical and functional success. Laserpexy offered faster visual acuity recuperation with fewer postoperative complications but required a second intervention and was costlier than cryotherapy. They opined that laserpexy to be a successful alternative to cryopexy in creating chorioretinal adhesion for scleral buckle surgery

B. Need for drainage of subretinal fluid?

Drainage of subretinal fluid is one of the debatable issues in scleral buckling. As this step is almost a blind procedure it is not free from potential complications that include choriodal hemorrhage, retinal incarceration and intraocular infection. Drainage in scleral buckling surgery is usually done in bullous detachments to visualise the breaks, to make space to allow a large scleral indent without significant increase in intraocular pressure. Hiltonet al.10 compared drainage vs. non drainage in a randomised controlled trial of 120 consecutive patients undergoing scleral buckling procedures. He found no significant difference in the primary success rate (87% in the drainage groupv82% in the non-drainage group), final flattening rate (97% in both groups) or visual acuity outcome between the two groups. Decision on whether to drain subretinal fluid was assigned at random preoperatively and all surgeries were done by a single surgeon. It can be concluded that drainage of subretinal fluid is not an absolute necessity and is indicated only in specific situations.

C. Which is the best method of drainage?

Various methods of drainage have been described:

Sub-retinal haemorrhage is the dreaded complication and is problematic if it tracks back under the macula. Most retina specialists practice favours the expediency of a needle drain when the macula is attached and the submacular space is closed, while the safer laser drain is preferred when the macula is off. In case of total retinal detachments undergoing buckling, drainage on the nasal side would reduce chances of sub-retinal bleed tracking under the macula in the event of such a complication.

Sub-retinal haemorrhage is the dreaded complication and is problematic if it tracks back under the macula. Most retina specialists practice favours the expediency of a needle drain when the macula is attached and the submacular space is closed, while the safer laser drain is preferred when the macula is off. In case of total retinal detachments undergoing buckling, drainage on the nasal side would reduce chances of sub-retinal bleed tracking under the macula in the event of such a complication.

Pneumatic retinopexy
Pneumatic retinopexy has the major advantage of being an outpatient procedure. The technique was recommended in the management of RD caused by a single break, no larger than one clock hour and located within the superior eight hours of the ocular fundus, or by a group of small retinal breaks within one clock hour, in the absence of grade C or D PVR and uncontrolled glaucoma. Some selected cases with multiple retinal breaks located more than 30° apart can also treated with this technique.
Perfluoropropane (C3F8) and sulfur hexafluoride (SF6) are the most commonly used gases for pneumatic retinopexy. It involves cryopexy of retinal breaks if possible, followed by injection of an intravitreal gas bubble and postoperative positioning to allow the gas bubble to act as a tamponade for the retinal break. If cryopexy is not performed, laser photocoagulation is applied to the retinal breaks after they have been flattened with intraocular gas. 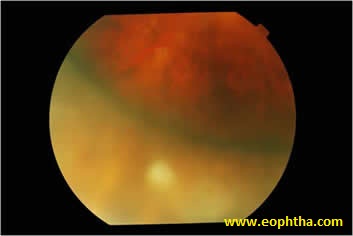 Other rare complications include supra-choroidal gas, extension of the retinal detachment, macular hole formation, and entrapment of gas in the pre-vitreous space anterior chamber 15
In a comprehensive review by Clement et al 16 the updated average surgical outcomes for the 4,138 eyes in the 21-year period revealed a single-operation successes(74.4%), final operation successes (96.1%), new retinal breaks (11.7%), and proliferative vitreoretinopathy (5.2%).

Pneumatic retinopexy is an effective procedure. Since the success rate is only marginally less than scleral buckling, it is a viable alternative and is of great use in patients unfit for surgery.
Contentious issues in Pneumatic retinopexy

Primary pars plana vitrectomy (with or without sclera buckling)
Vitrectomy is usually indicated in patients with PVR greater than grade C1, giant retinal tears, posterior breaks, multiple breaks at multiple levels, in patients of iridofundal coloboma with RD.
Over the past decade, more and more surgeons have been advocating pars plana vitrectomy for the primary management of retinal detachments probably due to the vitreo-retinal training patterns and better technology in vitrectomy machinery and wide angle visualization.
Technique involves a standard 3-port pars plana vitrectomy with removal of the juxta basal vitreous. During this process, retinal breaks are identified, freed of vitreous traction and marked. Internal subretinal fluid drainage is then performed by one of 3 techniques: either through the causative anterior breaks using perfluorocarbon liquids or through one of the causative anterior breaks using a cannulated extrusion during fluid–air exchange or through a posteriorly created retinotomy during fluid–air exchange. The breaks are then treated with endolaser, either through perfluorocarbon liquids or under air. Some surgeons will only treat the identified retinal breaks, whereas some other will perform 360° peripheral laser, placing several rows posterior to the vitreous base. The air is finally exchanged for a long-acting gas/ silicone oil. The patient has to maintain position postoperatively. One of the major advantages of vitrectomy over scleral buckling is the greater ability of visualizing retinal breaks with the combined use of wide-angle viewing systems and scleral depression. Retinal break detection is also possible with the help of perfluorocarbon liquids and the Schlieren phenomenon. Many retinal breaks undetectable by ophthalmoscopic examination can thus be found during pars plana vitrectomy. The risks of hemorrhage and retinal incarceration associated with external subretinal fluid drainage are not encountered with endodrainage during vitrectomy.

Other significant advantages of vitrectomy over scleral buckling include the

Removal of the vitreous potentially present in the anterior segment and around the intraocular lens might also be beneficial for postoperative visual recovery.

Disadvantages of pars plana vitrectomy over scleral buckling include a more

Postoperative complications include cellophane maculopathy, cystoid macular edema, PVR. Some have also suggested that compartmentalization of fluid against the retinal surface might potentially increase the risk of epiretinal membrane formation.

Several factors appear to have an influence in the anatomical and functional recovery after vitreo-retinal surgery in PRD.

As per the results of the SPR (Sclera buckling vs Primary Vitrectomy in Retinal Detachment) study, 26 a prospective randomized clinical trial comparing scleral buckling surgery (SB) and primary pars plana vitrectomy (PPV) in rhegmatogenous retinal detachments of medium complexity, primary vitrectomy combined with scleral buckling surgery is recommended for the treatment of rhegmatogenous retinal detachment in pseudophakic and aphakic patients. It should be noted that these results do not apply to localized detachments with a single break and patients with proliferative vitreoretinopathy (PVR) grade B or higher and giant tears were excluded from the study.

1. Optimal intraocular tamponade agent in the surgical management of PVR

The Silicone Study group analysed the efficacy and complications of intraocular gas and silicone oil tamponade in patients with severe PVR and reported its results in a series of publications.27–37 Silicone oil and C3F8 gas were similar in visual acuity and anatomical outcomes. No difference was found in keratopathy rates and persistent hypotony was more common in C3F8 treated eyes (P< 0·05).

In a prospective, nonrandomized, comparative study in pseudophakic patients Stangos et al 40 did not find any additional benefit of encircling band.

Conclusions:
Rhegmatogenous retinal detachment (RRD) can have multiple anatomic presentations. An individualized approach to repair of RRD is necessary for optimal results than following a single stereotyped procedure. Scleral buckling can be a valuable component for repair of retinal detachments as it supports both the existing tears and the vitreous base. However, the use of scleral buckling has decreased in recent years due to the success of vitrectomy alone and the avoidance of complications associated with scleral buckle that include buckle erosion and strabismus.
Based on available evidence the following the principles in management of rhegmatogenous RDs

Some Common representative situations and management options are described in the table below.