Vitreous is a transparent, colour less gel like structure which occupies the posterior compartment of the eye. It comprises about 80% of the total volume of the globe (two third of total volume of eye), about 4mL. The surfaces of the intraocular structures that interface with vitreous are mainly basement membrane in nature e.g. pars plana of cilliary body, internal limiting membrane of retina and vitreous is attached to them with varying strength of adhesion.

Vitreous at a glance:

The word “vitreous” is derived from a Latin word “vitrum” which means glass. 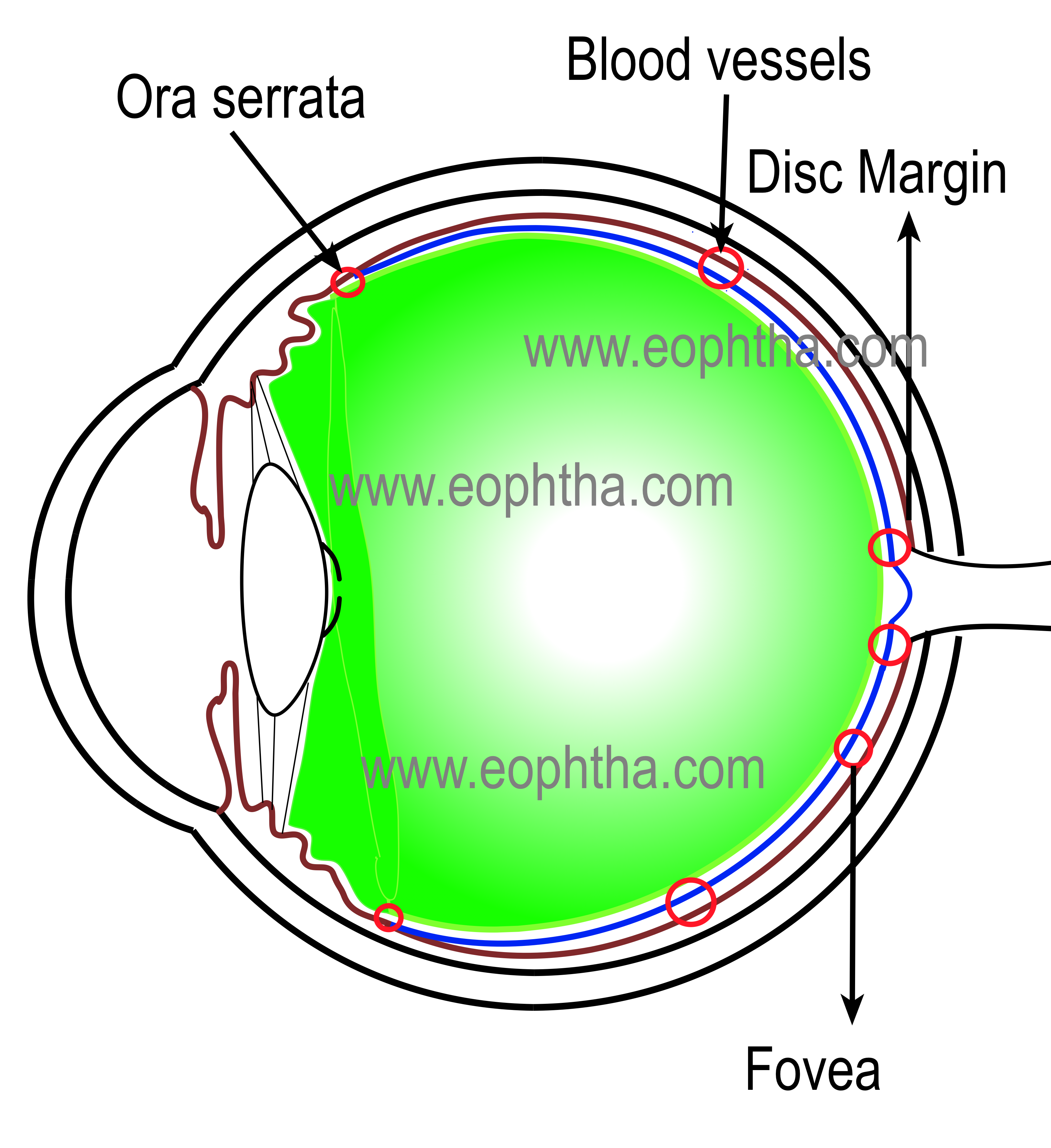 hed to its surrounding structures by condensation of collagen fibrils. From strongest to weakest, these are-

Vitreous base
The vitreous base is the place of strongest adhesion of vitreous. Vitreous base forms a band of 4 to 6 mm width (1 to 2 mm anterior to the ora serrata and 1 to 3 mm posterior to it) which lies in the posterior aspect of the parsplana and adjacent anterior aspect of the ora serrata. There is strong adhesion between vitreous fibers of the vitreous base region and basement membrane of the nonpigmented epithelium of the cilliary body and internal limiting membrane of the periphery of the retina. Hyaloideocapsular ligament
Hyaloideocapsular ligament of Weiger or Retrolental ligament is another strong adhesion of vitreous and posterior capsule of lens. It is a circular adhesion, 8-9 mm in diameter .The circular line of adhesion between vitreous and posterior lens capsule is often termed as “Egger’s Line”. The strength of this retrolental adhesion and peripapillary adhesion of vitreous decreases with age. Within this circle, there lies a potential space of nonadhesion between vitreous and lens, known as space of Burger or Erggelet's space. (Also readAnatomy of Lens)

Vitreous is attached with the macula in an annular fashion with a diameter of 3 -4 mm.It is also attached alongside the larger retinal vessels. 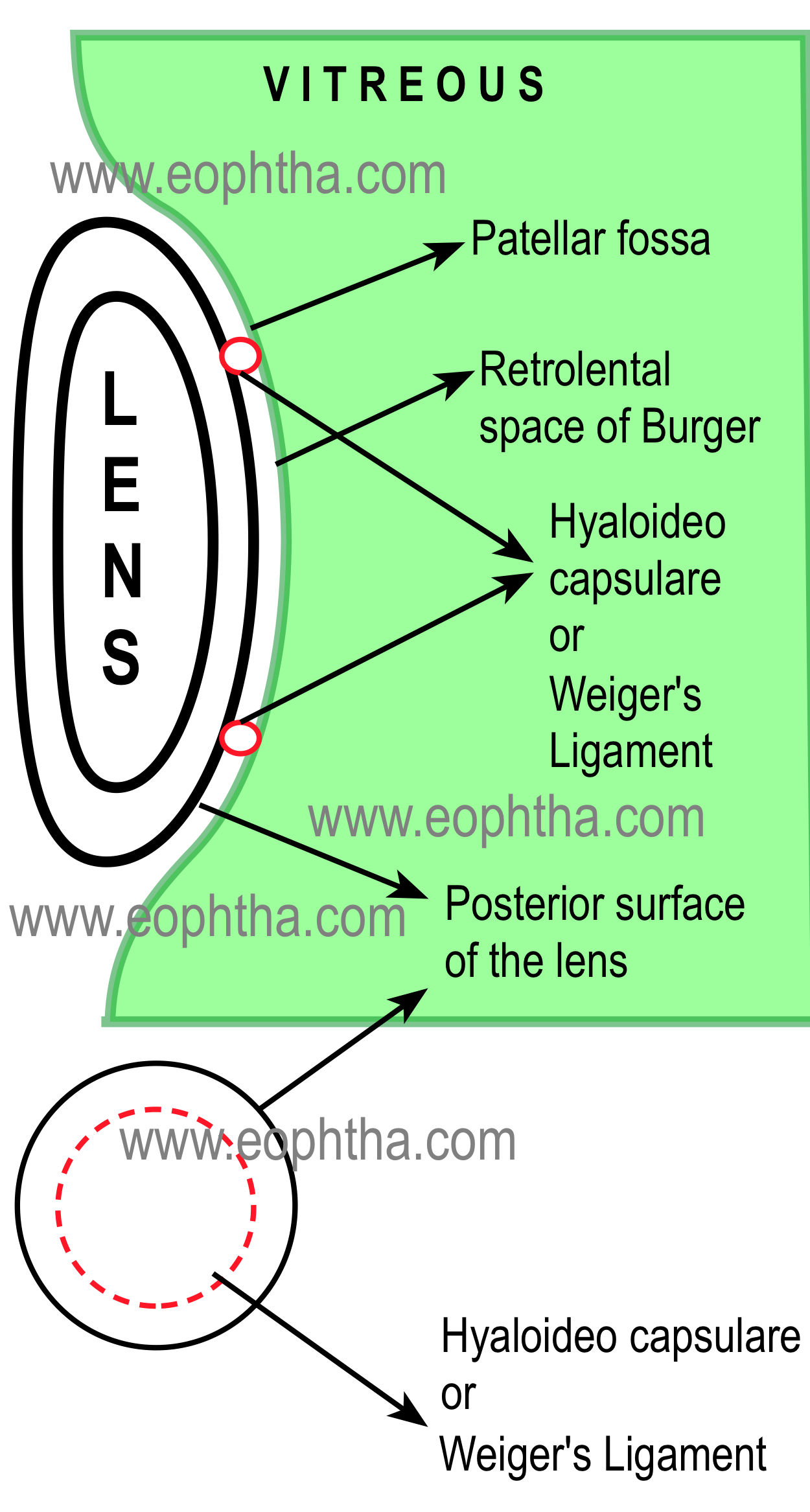 For description purpose, vitreous can be divided into a outer zone and central zone.

Outer zone of vitreous:
The outermost zone of vitreous is also known as the cortex. Most of the vitreous collagens are located in cortex and these collagen fibrils run parallel & perpendicular to retinal surface.

Central zone:
The central zone has little collagen compared to outer vitreous and physically more liquid than the outer zone of vitreous. In this region, vitreous cells (hyalocytes) are less in number and collagen fibrils are thinly scattered.

Cloquets Canal:
The central vitreous is traversed by a canal which is known as cloquet or hyaloid canal or retrolental tract. It extends from the posterior surface of the lens to the optic nerve head. Basically it represents the remnants lumen of the course of hyaloid artery during embryogenesis. This space is devoid of collagen fibrils. It is 1 to 2 mm in diameter and “S” shaped from anterior to posterior. 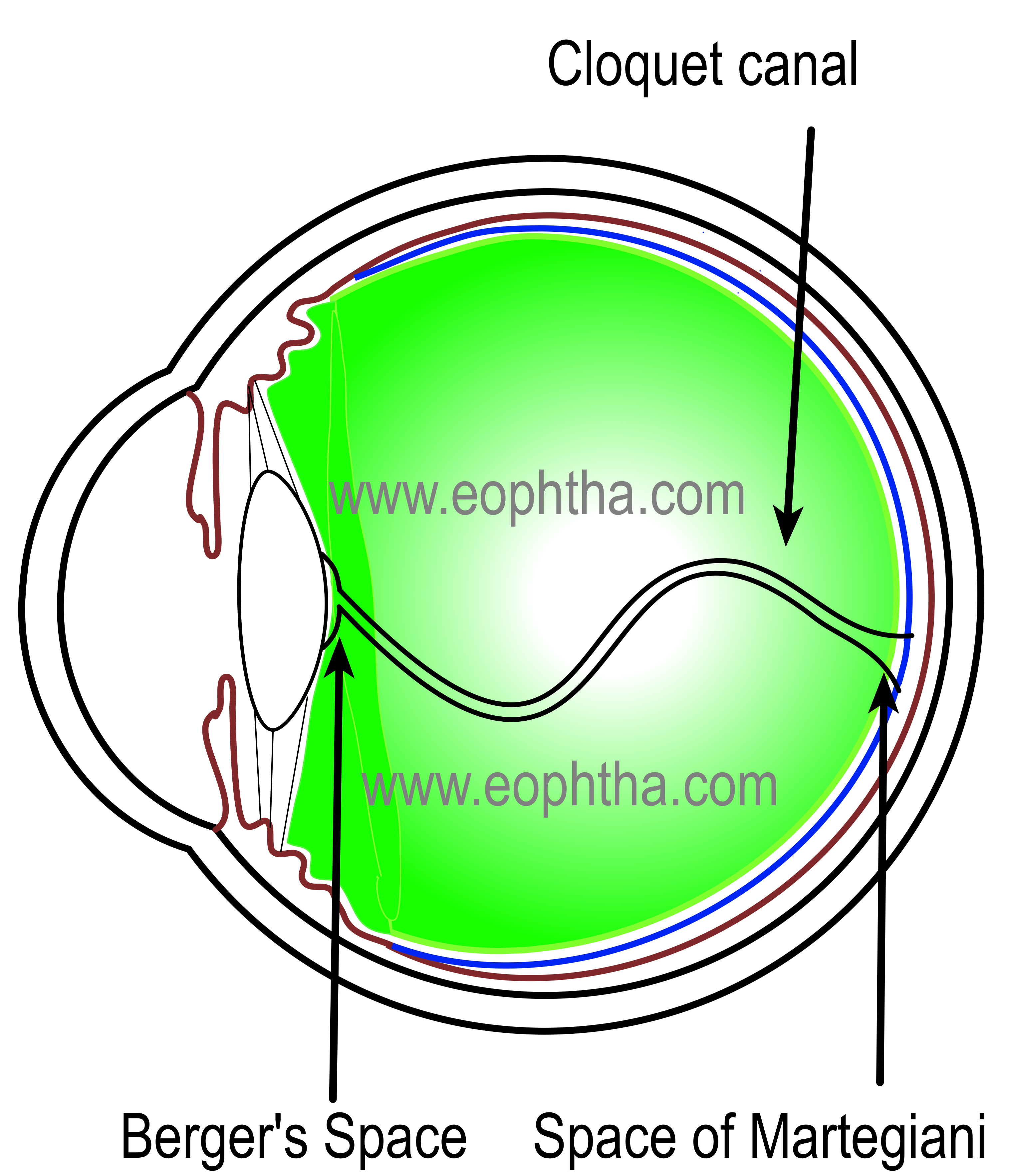 It starts from patellar fossa as a widening and after taking an “S” shaped course in central vitreous, again widens near the optic nerve head to form space of Martegiani. A remnant of incomplete atrophy of the hyaloid artery may be seen in this location and is called Bergmeister's papilla.

With age, the firm attachment of vitreous with optic nerve head loosens. When vitreous detaches completely, this peripapillary attachment becomes visible clinically as a partial or complete annular ring, which is known as Vogt or Weiss ring.

Though vitreous is an acellular structure, hyalocytes or vitreous cells are found in cortex adjacent to retina and cilliary body. They are found near the vitreous base, over the optic nerve head and in close proximity to the retinal vessels. Hyalocytes are basically mononuclear phagocytes or macrophages. Few fibrocytes and glial cells are also seen in vitreous.