The current management of post-cataract surgery acute endophthalmitis is greatly influenced by the Endophthalmitis Vitrectomy Study (EVS). The EVS was a multicentric randomized clinical trial that had asked two important questions: (1) Is vitrectomy necessary in all cases of post intraocular lens (IOL) acute bacterial endophthalmitis? and (2) Does systemic antibiotics help in these cases? The EVS recruited 420 patients with acute bacterial post IOL endophthalmitis in 24 centers in the USA. The study recommended that while intravitreal antibiotics must be given to all eyes, vitrectomy should be reserved for eyes with worse presenting vision (light perception, LP, only) and the study did not find any additional benefit of intravenous antibiotics. [1] The major findings of the EVS are listed in Table 1. Are these recommendations followed strictly a decade and half after its first publication in 1995?
We will discuss in this article the management strategies we currently practice at the L V Prasad Eye Institute vis-à-vis the EVS recommendations. These discussions are confined to management of acute post cataract surgery endophthalmitis alone and are based on the evidences generated in our institute over two decades. We will present them in the following seven major headings and finally sum up with the treatment algorithm. (I) Clinical Features; (II) Microbiology; (III) Choice of Intravitreal antibiotics; (IV) Rationale of Intravitreal corticosteroid; (V) Need for systemic antibiotics; and (VI) Cost effectiveness of vitrectomy, (VII) Risk factors, and (VIII) Treatment algorithm.

The final confirmation of infection is obtained from the microbiology laboratory. Undiluted vitreous from an infected eye is the source for microbiology studies. The anterior chamber fluid is not as good a source as the undiluted vitreous. Microscopy uses a variety of stains such as Gram, Giemsa and calcoflur white. The culture media include blood agar, chocolate agar, thioglycollate broth and brain heart infusion for bacteria and potato dextrose agar and Sabouraud dextrose agar for fungi. While the culture is more confirmatory, microscopy of the undiluted vitreous should not be discounted for the simple reason that the initial treatment is either empirical or is based on the vitreous smear report; the culture report is available usually day later. We have reported that more than six polymorphs per high power field are indicative of infection. [5]

The distribution of infecting organism in the EVS and two time period (1991-1997 and 1999-2008) in the L V Prasad Eye Institute is listed in Table 3. There was no fungus in the EVS because the study was confined to bacterial endophthalmitis.

4. The rationale of Intravitreal Corticosteroid

Systemic antibiotics used to be a standard of care in treatment of infective endophthalmitis. This went out of favor because the antibiotics used would not cross the blood retinal barrier. This was further substantiated by the EVS. The EVS used intravenous ceftazidime and amikacin, and both of them have poor intraocular penetration. Since then there are several new antibiotics, particularly the fluoroquinolones; they are known to cross the blood retinal barrier in human eyes. [11.12] In our laboratory we have shown that the vitreous concentration of ciprofloxacin following three day oral therapy at 1500 mg/day is 0.66µg/ml in a proven endophthalmitis patient (unpublished data). This vitreous level of ciprofloxacin is more than the minimum inhibitory concentration (MIC) 90 of many common infecting microorganisms. [13] We have also demonstrated that the vitreous vancomycin concentration reduces below MIC 90 in two to three days after the intravitreal injection. [14] This is true for all other intravitreal antibiotics.

The EVS has shown that 9% of the study patients required repeat therapy for non-resolving inflammation /infection [1] and 21% of the repeat culture grew gram-negative microorganisms. These points to the fact that there are a group of patients who need prolonged therapy. Possibly these patients have an infection with more virulent microorganisms. This therapy could be either a repeat intravitreal injection of the culture and sensitivity- adjusted antibiotic or a systemic antibiotic that will rise above MIC 90 in a short period of time, and either act synergistically with the earlier injected intravitreal antibiotic or independently. Hence we recommend use of selective systemic antibiotic in selected cases of endophthalmitis, typically more fulminant endophthalmitis, presumably caused by more virulent microorganisms. Since oral therapy is easy to administer and does not require prolonged hospitalization use of oral ciprofloxacin or gatifloxacin could be beneficial.

Vitrectomy in endophthalmitis helps clear the media, debulks the vitreous and helps superior drug penetration. The EVS did not find added advantage of vitrectomy in eye with vision better than hand motions (HM). The EVS recommended vitreous biopsy only for eye with HM and vitrectomy for eyes with presenting vision of light perception. In our investigation vitrectomy was found superior to vitreous biopsy for an anticipated outcome of 20/40 irrespective the presenting vision was LP or HM. (unpublished). Presuming that any individual with better seeing- eye has better quality of life and could be more productive, probably vitrectomy is as cost-effective as the vitreous biopsy in a given case of endophthalmitis.

The EVS identified eleven risk factors in post-cataract surgery endophthalmitis. The important ones are the corneal infiltrates; cataract wound abnormalities, afferent papillary defect, loss of red reflex, LP vision at presentation, and early onset (within two days of surgery). [1] In addition, we reported that presence of vitreous membrane and exudates (seen ophthalmoscopically or by ultrasonography) is an important risk factor. [15] Presenting vision of light perception had an odds 5.5 for the final visual acuity of <20/60 and presence of vitreous membrane and exudates had an odds of 2.5 for the final visual acuity of <20/400 in our patients.

Our proposed treatment algorithm in post operative acute endophthalmitis management is based on our experience and evidence produced in over two decades. [16] We agree with the EVS recommendation that all patients need intravitreal antibiotics. Vitreous biopsy as recommended by the EVS could probably suffice in patients with visual acuity of 20/400 or even 20/200, not HM. Microbiology of vitreous is mandatory in all patients. We suggest intravitreal corticosteroid (dexamethasone) in all bacterial endophthalmitis. We also suggest oral ciprofloxacin or gatifloxacin in fulminant infection in adults; ciprofloxacin should be the antibiotic of choice inPseudomonasinfection since the MIC 90 of this antibiotic is much lower than gatifloxacin. We suggest that all eyes receive frequent topical antibiotic

(fluoroquinolone), frequent topical corticosteroid (Prednisolone acetate) and cycloplegic (Homide). Should the eye not respond favorably in three days we suggest vitrectomy for eyes initially treated with vitreous biopsy and vitreous biopsy for eyes that had initially had received vitrectomy; in either situation a repeat microbiology and a repeat intravitreal antibiotics are mandatory. Should the eye still not respond in another three days we suggest another intravitreal antibiotic, but now culture and sensitivity adjusted antibiotic. [Figure 1] Figure 2. A 45 year old male presented with gross reduction of vision 3 days after cataract surgery. The eye had minimal conjunctival congestion, no pain, hypopyon and cells/flare in the anterior chamber (Left) The vitreous grew Staphyloccous epidermidis. Six weeks following vitreous biopsy, intravitreal antibiotics (cefta and vanco), dexamethasone, and systemic ciprofloxacin the eye was quiet (Right) and vision improved from 20/200 to 20/25 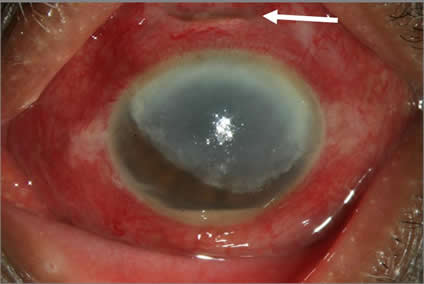 Figure 3. A 67 year old lady presented with gross reduction of vision 30 days after cataract surgery. There was wound gap (white arrow), very congested conjunctiva, three fourth of cornea had a translucent membrane behind and hypopyon. The vitreous grew Aspergillus terreus. Despite vitrectomy, intravitreal amphotericin B and oral ketoconazole the eye could not be salvaged. Figure 4. A 77 year old male presented a day after exracapsular cataract and IOL surgery with acute pain and loss of vision in the operated eye. The anterior chamber was full with exudates and there was no view of any other ocular structure (Top Left). Six weeks after IOL explantation, vitrectomy, intraocular antibiotics (amikacin and vancomycin), intraocular dexamethasone, oral ciprofloxacin the eye was quieter and different parts of the eye were visible (Top right). The vitreous grew Pseudomonas aeruginosa. Twelve weeks later the vitreous was clear enough to regain from LP to 20/70 (Bottom).

In last fifteen years numerous advances have been made in treatment of endophthalmitis. Currently we have newer topical and systemic antibiotics that penetrate the blood retinal barrier, we have more potential corticosteroid to control inflammation, we have refined the vitrectomy technology to intervene when necessary, and most importantly we have now newer evidences of endophthalmitis care. The EVS provided us the first such evidence and stimulated the treating surgeons to question the convention. The EVS recommendations continue to be true in a broader sense. We have to only reapply the recommendations in light of the new evidence and local variations.