The term sclera is derived from Greek word scleros meaning "hard".Sclera is an opaque, elastic, and resilient tissue of the eye. It can be compared with an incomplete shell comprising approximately 90% (five-sixths) of the outer coat of the eye. Anteriorly it begins at the limbus and terminates at the optic nerve canal posteriorly. The primary function of the sclera is to protect the eye and maintain the shape of the eye ball.

Human beings are the only primates with white sclera 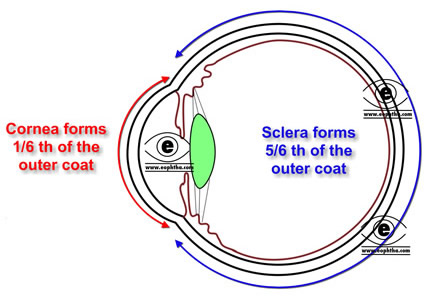 Embryologically like corneal stroma and endothelium, sclera originates from mesoderm.

The human sclera is white in colour. This white appearance is because of the scattering of all wavelengths of light by dense irregular bundles of collagen in sclera. In children, a bluish hue is observed because of the extremely thin sclera which allows the visibility of underlying choroid. In older age the sclera may appear slightly yellowish because of the deposition of fat.

Thickness of sclera:Sclera is thicker in males than in females. Human sclera is thickest near the optic nerve, where it is approximately 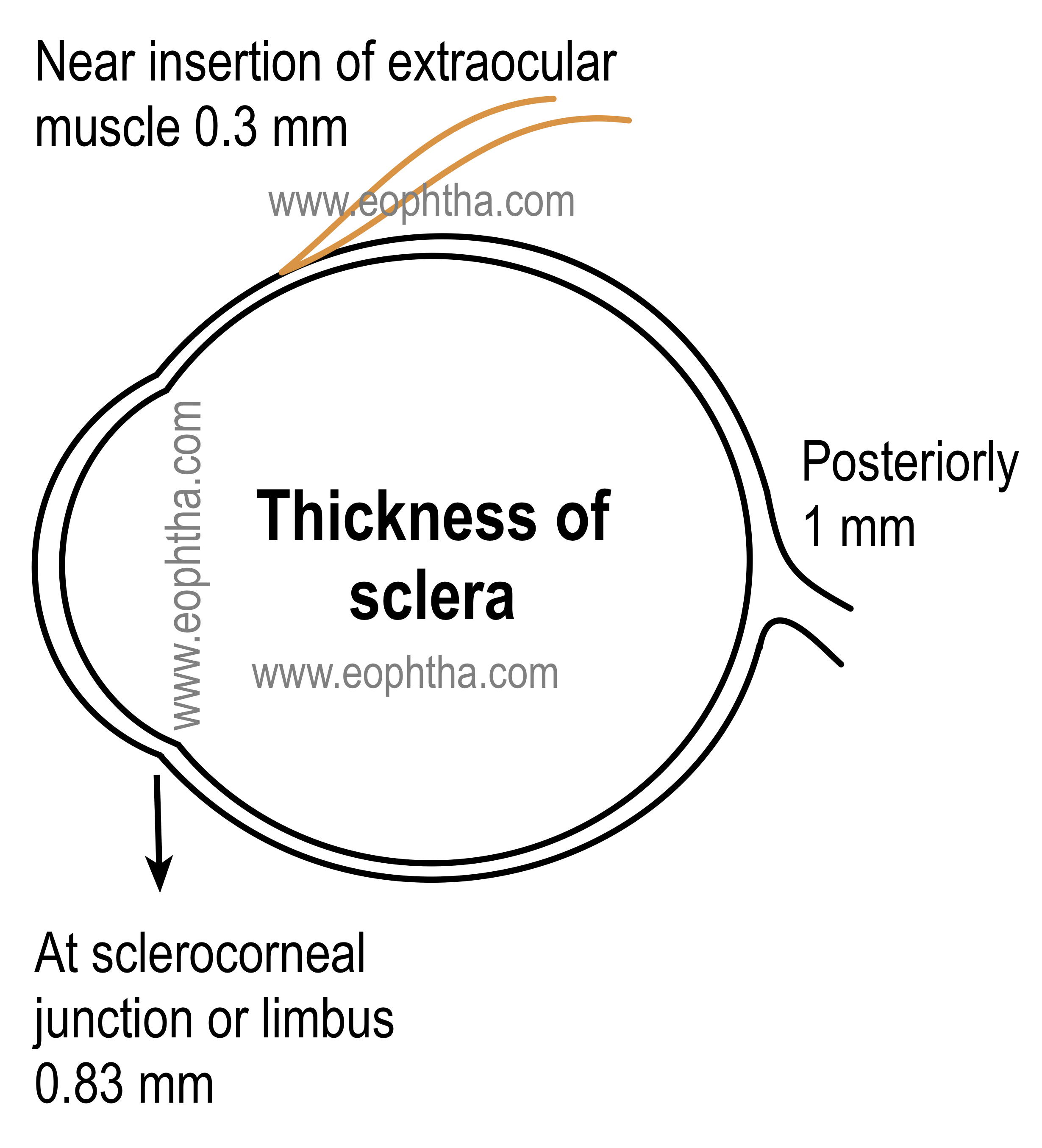 Ultra-structurally, Sclera can be divided into three parts:

1. Episclera:The episclera is the thin densely vascularized layer of connective tissue overlying the sclera and situated below the tenon’s capsule. Apart from the vessels and unmyelinated nerve fibres, it contains bundles of collagen and also cells like fibroblast and occassional melanocytes. Anteriorly episclera blends with subconjunctival tissues and tenon’s capsule 1 to 3 mm behind the limbus. It becomes very thin and indistinct posterior to the equator. Episcleral is supplied by anterior ciliary arteries anteriorly where as posterior ciliary artery supplies the posterior part of episclera.

Note: Scleritis is always accompanied by an overlying episcleritis. On the other hand, episcleritis per se is very rarely associated with scleritis

2. Sclera proper:sclera proper or scleral stroma is also called substantia propria. Ultrasructurally, sclera is composed of collagen bundles, elastic fibres, fibroblasts and ground substances. These ground substances are proteoglycans and glycoproteins. Collagen bundles in sclera are of varying sizes and are irregularly arranged the reason why sclera is not transparent like cornea. These variation in scleral collagen fibres are more marked in mid-sclera, where the diameter of the fibres range from 50 to 400 nm. The scleral fibroblasts play an important role in synthesis and organisation of collagen,proteoglycans and glycoproteins .

3. Lamina Fusca:Lamina fusca is the innermost layer of sclera. It is characterised by abundance of pigmented cells or melanocytes, mostly migrated from choroid. The connective tissue of this layer is loosely arranged than rest of the sclera. Lamina fusca is separated from choroid by a thin potential space known as suprachoroidal or perichoroidal space.

Sclera is penetrated by various arteries and nerves in many places. We will call such penetrations as aperture and can be discussed as : 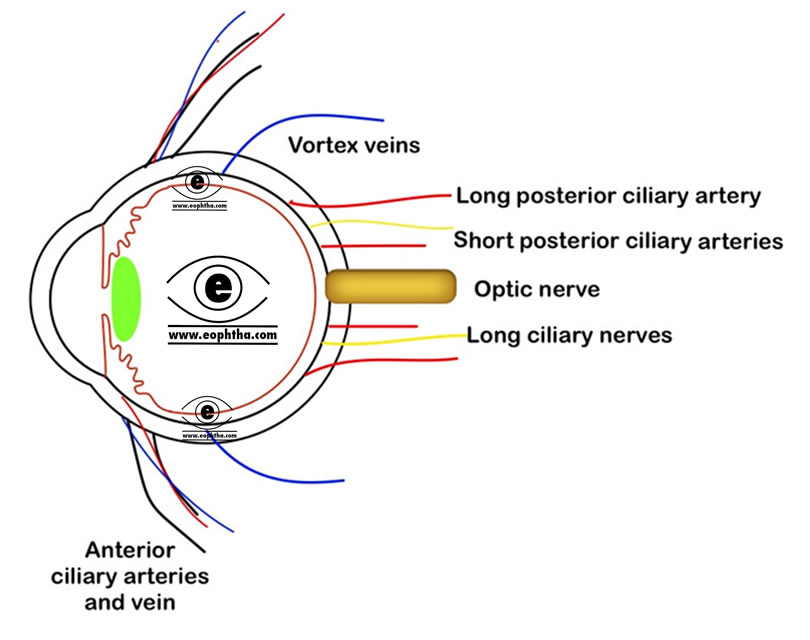 Posterior scleral apertures:Posteriorly sclera is pierced by many structures and can be sub divided into
Posterior scleral foramen: Sclera is perforated by optic nerve posteriorly,3 mm medial and 1 mm superior to the posterior pole. At this point of optic nerve exit sclera blends with dural and arachnoid coverings of optic nerve and becomes a sieve like membrane internally (Lamina cribrosa is described below). Sclera is also penetrated by central retinal artery and veins. Circle of Zinn( also called circle of Zinn-Haller) is named after the German anatomist and botanist Johann Gottfried Zinn. Readamazing facts. It is a circular anastomosis between short ciliary arteries while piercing sclera and supplies choroid, optic nerves and pia maters

Middle scleral aperture:These apertures are situated approximately 4 mm behind or posterior to the equator and represent the exit of the four (occasionally 5 ) vortex veins. Vortex veins drain the veins of choroid, ciliary body, and iris.

Anterior scleral apertures:these are located near the insertions of the recti muscles and allow entry of anterior ciliary arteries.

Blood supply:
The episclera recieves its blood supply from the anterior ciliary arteries, anterior to the insertions of the rectus muscles and the long and short posterior ciliary arteries.
Scleral stroma is relatively avascular and receives its nutrition mainly from episcleral vascular bed and, to some extent from the underlying choroidal vasculatures. The sclera contains numerous channels or passages through which the arteries,veins and nerves pass. These channels or passages are known as emissary canals.

relatively avascular structure except for some vessels that pass through the emissary canals.

The low vascularity of sclera can be explained with low metabolicdemand of the tissuebecauseoftheslowturnover rate of its collagen and cells .

Scleritis occurs more commonly anterior to the equator because of the more abundant anterior vascular supply. Since sclera is mainly dependent on episclera providing a response to an inflammatory stimulus, scleritis is almost always accompanied with overlying episcleritis. However episcleritis is usually not associated with scleritis.

Direct damage to or the stretch of these nerves is the cause for severe pain in scleritis. And because of the insertion of the extra ocular muscles in sclera, the eye movement increases the intensity of pain in scleral inflammation.