Conjunctiva is a fine, translucent mucous membrane that joins and covers the anterior surface of eyeball and posterior side of the eyelids. It covers the posterior surface of the lids and reflects to cover the anterior part of the sclera, then becomes continuous with the corneal epithelium. At the lidmargin conjunctiva is continuous with the skin.

Parts of the conjunctiva:

Palpebral conjunctiva:It is the part of the conjunctiva that lines the undersurface or posterior surface of the eyelid. Sulcus subtarsalisorsubtarsal sulcusis a groove situated 2 mm away from lid margins. This groove is a common site of foreign body lodgment. Here perforating branches of marginal arcade pierce the tarsal plate to supply the conjunctiva. 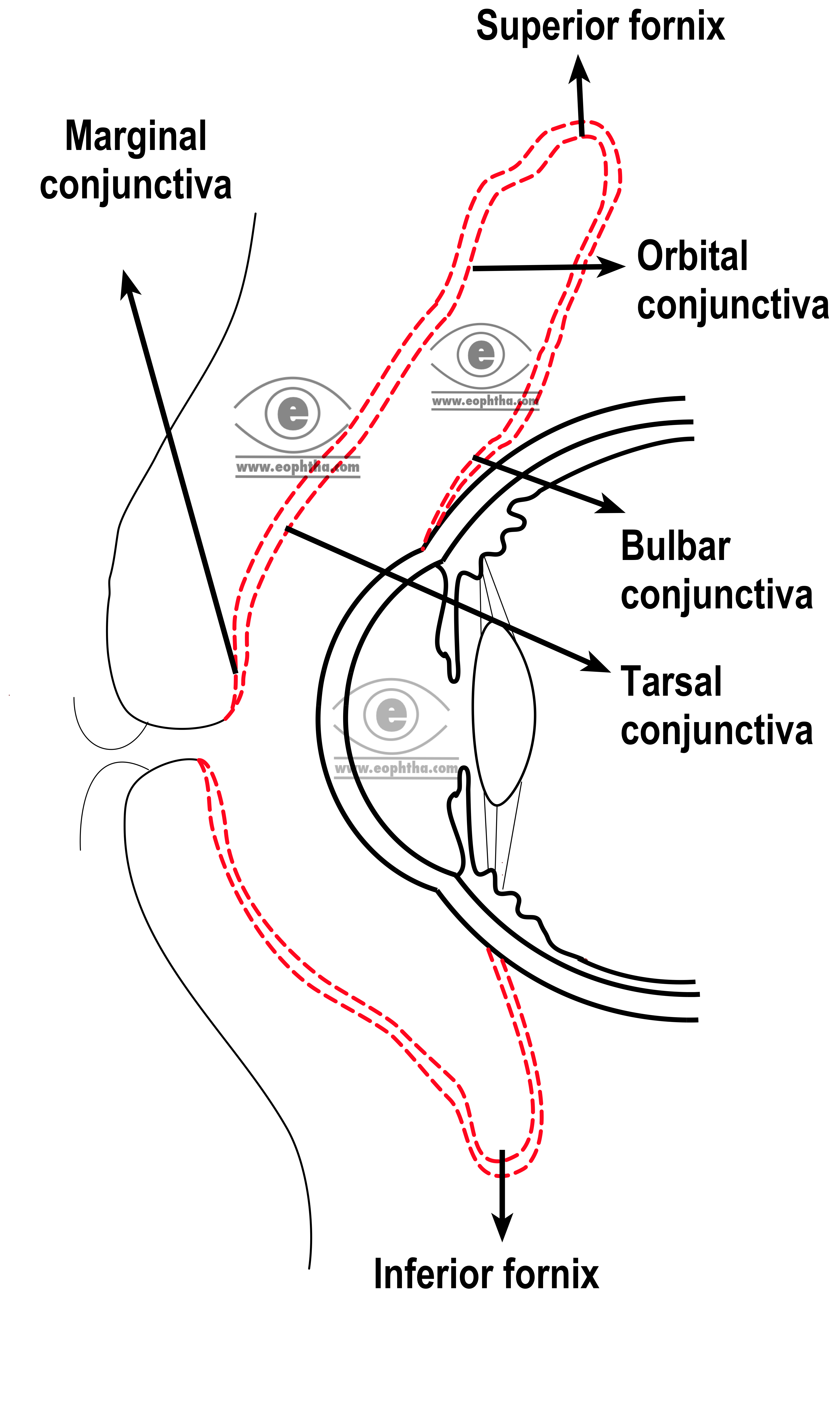 Follicles are thought to be identical to lymphoid follicles found elsewhere in the body. Follicle formation is characteristic of viral and chlamydial infections as well as toxic conjunctivitis due to the application of certain topical medications.Papillaeare composed of chronic inflammatory cells such as lymphocytes and plasma cells and are distinguished from follicles by the presence of blood vessels at their center. Giant papillae are found in certain allergic diseases (e.g., vernal catarrh)and after long-term use of contact lenses, keratoprostheses, ocular post enucleation prostheses, and cosmetic shells. Bulbar conjunctiva:It is the thinnest of all the parts of the conjunctiva and so transparent that underlying white sclera and vessels are seen clearly. It is loosely attached except for a zone of 3mm near the limbus and near insertions of the recti muscles. Limbal conjunctiva is the part of the bulbar conjunctiva which covers the limbal region and fuses with the corneal epithelium.

In limbus, conjunctiva, tenon’s capsule and sclera fuse together. As the conjunctiva in this region is less mobile, a firmer hold of the globe can be obtained with the help of forceps at the time of surgery.

The microscopic structure of conjunctiva: These cells are called goblet cells because of their goblet-like shape. Goblet is footed cup intended to hold a drink. It is intended for drinking during a ceremony. In the ultramicroscopic examination, apical portion of the cell is shaped like a cup, as it is distended by a large number of mucin granules whereas its basal portion is shaped like a stem for lack of these granules

Goblet cells may produce up to 2.2 mL of mucus daily. Mucus is essential for ocular surface integrity as it lubricates and protects the epithelial cells. Mucin reduces the surface tension of the tear film to ensure its stability.

Melanocytes:Melanocytes are primarily seen in the limbus, fornix, plica semilunaris, caruncle and at the sites of perforation of the anterior ciliary vessels. Sometimes they give the conjunctiva a brownish tinge.
Langerhans cells:Langerhans cells are actually dendritic cells, immune cells that form part of the immune system. Their main function is to process antigen material and present it on the surface to other cells of the immune system. Thus they function as antigen-presenting cells. The highest density of Langerhans cells has been found in tarsal conjunctiva followed by fornix and bulbar conjunctiva. The number of cells decreases with age. These cells contain rod-shaped or "tennis-racket" shaped cytoplasmic organelles known as Birbeck granule, which stains positively for ATPase.

The Langerhans cell is named afterPaul Langerhans, a physician and anatomist from Germany, who discovered the cells at the age of 21 when he was a medical student.

It consists of a superficial lymphoid layer and a deeper fibrous layer. The conjunctival epithelium rests on a connective tissue layer called the substantia propria. This tissue has enormous anti-infectious potential. Numerous mast cells (6000/mm3), lymphocytes, plasma cells, and neutrophils are normally present in this layer
Lymphoid layer:
The lymphoid layer consists of many lymphocytes that are scattered to form this fine connective tissue reticulum. This layer is thickest in fornices and terminates near sulcus subtarsalis. So the marginal conjunctiva is devoid of this layer.

The surface of the mast cell is coated with IgE antibody. There are about 10000 to 50000 IgE receptors in one mast cell of which 16% are occupied. Exposure of appropriately sensi­tized IgE coated mast cell to an airborne allergen is the initiating stimulus for the drama of allergy. The allergen binds to two separate IgE molecules creating a dimer that initiate a chain of reactions in the mast cell plasma membrane, and the mast cell membrane ruptures leading to extrusion of the contents of the cell to the surrounding tissue. The contents of the mast cell act like mediators of allergic reactions. These mediators are histamine, prostaglandin, eosinophilic granule major basic protein, eosinophil chemotactic factor, platelet activating factor. These mediators and many other cell mediators stimulate the proliferation of fibroblasts and recruit­ment of many cell types in the conjunctiva. These events play an active role in development of papillae in patients with VKC.

This layer contains the vessels and nerves of conjunctiva and glands of Krause. Except for the tarsal part of conjunctiva, where it is very thin and blends with the tarsal plates, the fibrous layer is thicker than the lymphoid layer.

Glands of Krause:The glands of Krause lie in deep subconjunctival tissue of the upper and lower fornices. They are about 42 in number in the upper fornix and 6 to 8 in the lower fornix. In the upper fornix, they lie between the palpebral part of the lacrimal gland and the tarsal plate. Microscopically structures of these glands are similar to main lacrimal glands. Their ducts unite to form a long duct which opens into the fornix.

Bulbar conjunctiva is the only tissue in body, where constituent blood vessels are visible 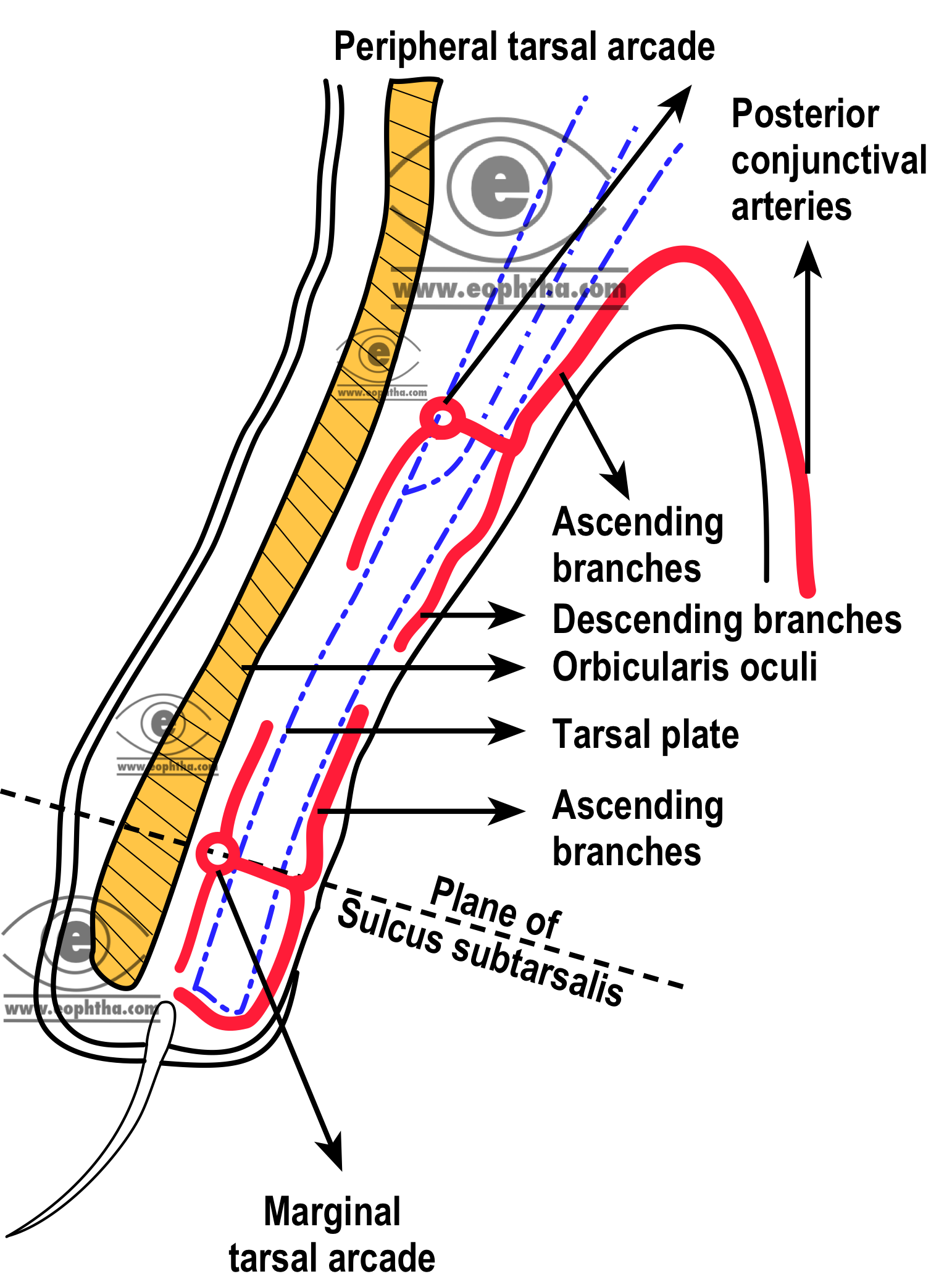 Free anastomosis occurs in this area between the anterior conjunctival vessels and the terminal branches of the posterior conjunctival vessels. Thus, the superficial and deep systems of vessels are closely connected in the limbal area. Clinically, this is an area of diagnostic importance. The superficial posterior vessels become engorged during inflammation or infection to give the bulbar conjunctiva bright red appearance that fades from the fornix toward the limbus.1 In keratitis or iritis, the deeper ciliary vessels are hyperemic, which leads to a characteristic circumcorneal injection that blanches with pressure. 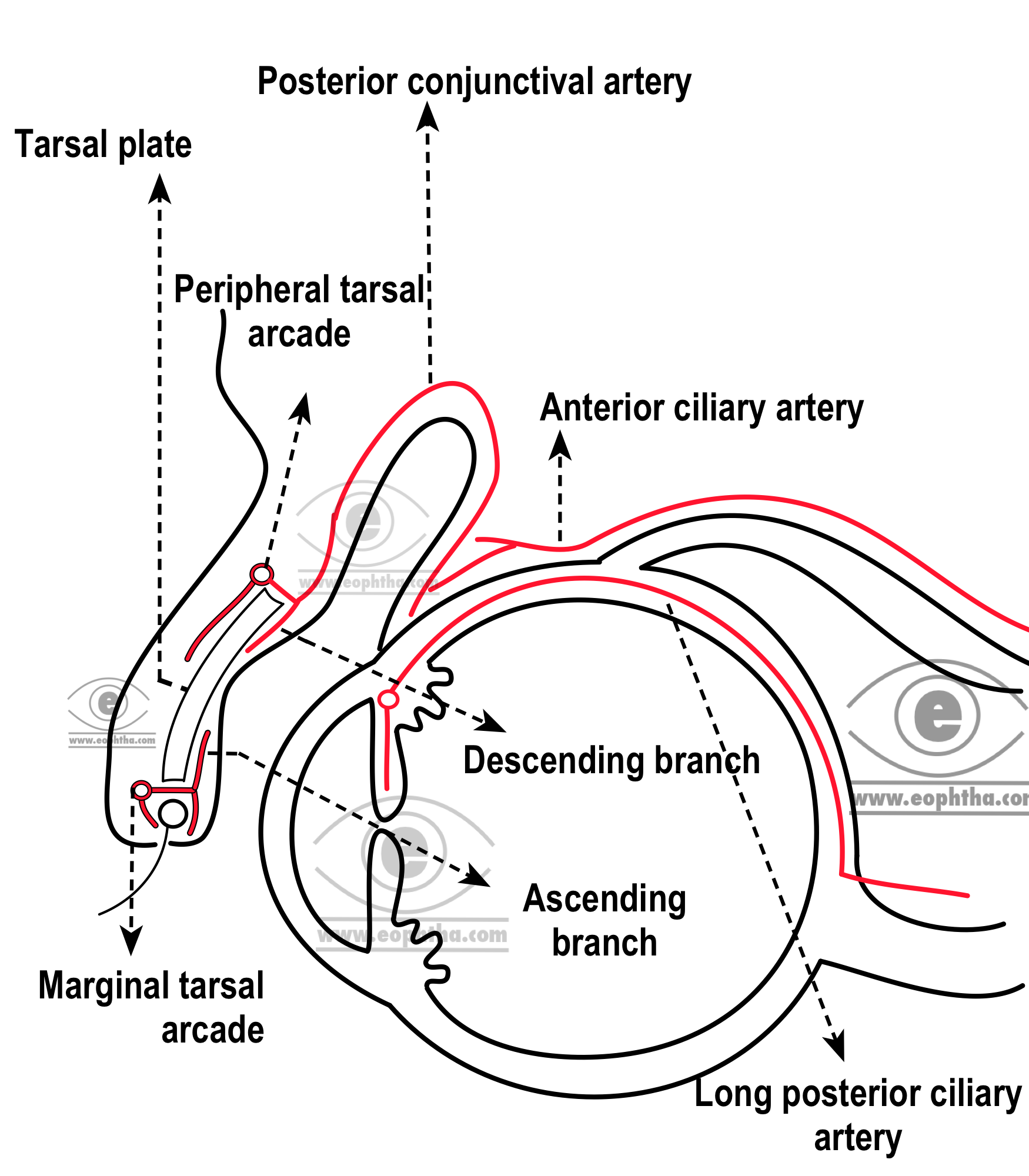 The nerve supply to the conjunctiva is derived from the first division of the trigeminal nerve. The nerves to the lid supply most of the conjunctiva. These nerves comprise the infratrochlear branch of the nasociliary nerve, the lacrimal nerve, the supratrochlear and supraorbital branches of the frontal nerve, and the infraorbital nerve from the maxillary division of the trigeminal nerve. The limbal area is supplied by branches from the ciliary nerves. All nerves form a network in the conjunctiva and terminate either peripherally in various forms of specialized endings or on blood vessels and epithelial cells. The majority of nerve endings in the conjunctiva are free, unmyelinated nerve endings. They form a sub-epithelial plexus in the superficial part of the substantia propria. Many of these fibers end on blood vessels, and others form an intraepithelial plexus around the base of epithelial cells and send free nerve endings between cells.