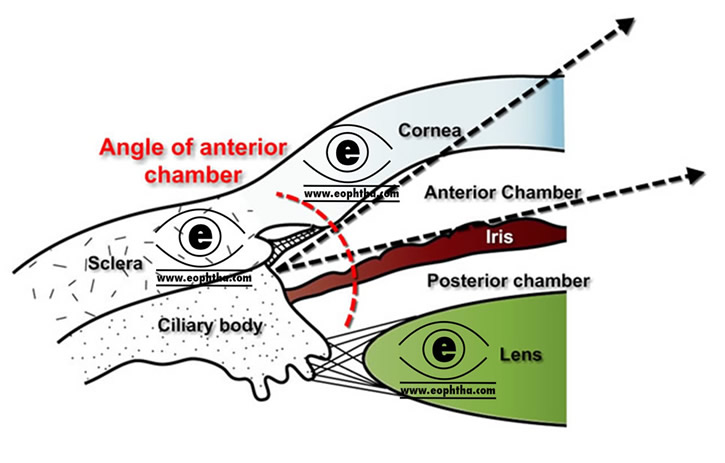 Anterior Chamber at a glance Scleral spur is composed of a group of fibres known as scleral roll. Scleral roll is composed of 75-80% collagen + 5% elastic tissue. This circular structure prevents ciliary muscle from causing Schlemm’s canal to collapse.

Canal of Schlemm:
A sieve or net like structure, the trabecular meshwork, bridges the scleral sulcus converting it into a tube, which is known as schlemm’s canal. It is a circular canal with a diameter of 190 to 350 microns, in the sclera which lies posterior to the sclerocorneal junction.as mentioned, it can be compared with a tube situated in side the sclera surrounding limbus. Though rarely there can be a plexus rather than a discrete canal. It is also called sinus venous sclerae. On cross section it is oval in shape and lined by endothelium. It communicate with anterior chamber through the trabecular meshwork internally. On the scleral side the c Schlemm’s canal is named after a German anatomist; Friedrich Schlemm. Interestingly, he was also the first person to describe the corneal nerves.

Remember:Canal of Schlemm is not a rigid tube and at higher intraocular pressure it often collapses. It can be opened up by a pull on the scleral spur ( exerted by longitudinal ciliary muscle fibres). Cholinergic drugs are used to facilitates the aqueous drainage by opening up the canal based on this mechanism. 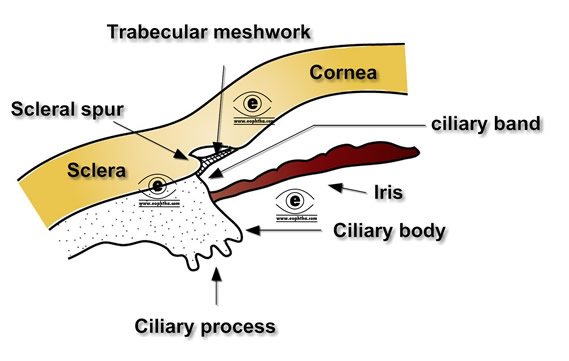 varying with pigmentation of the tissue, which is darker posteriorly.

Trabecular meshwork can be divided into three parts.

Uveoscleral meshwork: It is the most internal part of trabeculum. It is characterised by thick band of connective tissue and large pores. These thick bands originates from iris root and extends upto Schwalbe’s line.

Juxtacanalicular trabecular meshwork is sometimes referred to as the cribriform layer

When trabecular meshwork inserts in to the periphery of cornea, a ridge is created, known as Schwalbe’s line. It also marks the prominent end of Descemet’s membrane of the cornea. Gonioscooy is the examination of angle of anterior chamber. Normally structures of angle of anterior chamber is not visible through cornea because of the optical phenomenon known as total internal reflection. Because of the total internal reflection light that is reflected from the anterior chamber angle is bent internally within the cornea at the cornea–air interface and thus not visible to eyes directly. With the help of a goniolens we can eliminate this effect and place the resultant lens–air interface at a different angle and observe the light reflected from the structures of the angle.

The term "gonioscopy" was coined by Trantas, who in 1907, examined the angle of anterior chamber by indenting limbus in a patient of Keratoglobus. However credit for invention of goniolens goes to Salsman(1914)

Irregular, thread like processes arising from iris are seen in angle of anterior chamber during gonioscopy and they bridge the angle. These are known as iris processes . Usually these processes terminate near the scleral spur.