The pathogenesis of pseudophakic CME is thought to be multifactorial. However, the major etiology appears to be inflammatory mediators that are upregulated in the aqueous and vitreous humors after surgical manipulation. Inflammation breaks down the blood-aqueous and blood-retinal-barriers, which leads to increased vascular permeability.10 Eosinophilic transudate accumulates in the outer plexiform and inner nuclear layers of the retina to create cystic spaces that coalesce to form larger pockets of fluid.11 In chronic CME, lamellar macular holes and subretinal fluid may also form.The primary cause of CME depends on the underlying disease process, but most pathways eventually lead to vascular instability and breakdown of the blood-retinal barrier. The Müller cells in the retina become overwhelmed with fluid leading to their lysis. This results in an accumulation of fluid in the outer plexiform and inner nuclear layers of the retina.12 Another product of arachidonic acid breakdown involves the enzyme lipoxygenase, which alternately converts arachidonic acid to leukotriene, a chemotactic agent. The exact role of leukotriene in CME remains unclear, and, currently, no lipoxygenase specific blocking agents are approved for use in the treatment of CME.
Patients with systemic disorders, such diabetes or renal failure, may develop CME from breakdown of the blood-retinal barrier primarily due to vascular compromise. In diabetes, endothelial cells are damaged by advance glycosylation end-products. In addition, cytokines, such as vascular endothelial growth factor (VEGF), accumulate in the vitreous cavity of diabetic patients and lead to capillary leakage.
CME can also be caused by mechanical forces (ie, epiretinal membrane, vitreomacular traction) pulling on the retinal surface, leading to vascular compromise and breakdown of the blood-retinal barrier.
Other causes also include Propine/Epinephrine and Prostaglandins Retinitis pigmentosa Inflammatory (pars planitis, sarcoidosis, JRA, birdshot retinochoroidopathy) Vascular diseases (BRVO, CRVO, parafoveal telangiectasis) Epiretinal membrane Nicotinic acid Tumors, choroidal Age-Related Macular Degeneration In severe cases, the swelling may persist despite treatment. Chronic CME may cause structural changes in the retina, including retinal thinning and scarring. Chronic cases can also lead to lamellar (partial-thickness) macular hole formation.
Endogenous prostaglandins (PGs) are known to modulate normal cell function as well as inflammatory response. The conventional route of aqueous humor flow is through the trabecular meshwork, Schlemm’s canal and episcleral vessels. It is thought that PGs may regulate uveoscleral outflow by metalloproteinases- (MMP)-mediated alterations in the ciliary muscle in extracellular matrix metabolism.13,14,15 It has also been shown that XALATAN (Latanoprost) induces cystoid macular edema (CME) in patients in the early postoperative period of cataract surgery as well as numerous case reports documenting CME with XALATAN (Latanoprost) use.16,17,18 Halpern and Pasquale documents thirty-four eyes of thirty-two patients with documented CME in aphakia and pseudophakia. 19 Risk Factors include surgical Complications like Vitreous loss, Vitreous traction at incision sites, Vitrectomy for retained lens fragments, Iris trauma, Posterior capsule rupture, Intraocular lens dislocation, Early postoperative capsulotomy, Iris-fixated intraocular lenses, Anterior chamber intraocular lenses.20

Cystoid macular oedema may be asymptomatic but may present with decreased and/or distorted vision. Slit-lamp biomicroscopy may not show any abnormalities in 5% to 10% of eyes.21On biomicroscopy, retinal thickening and loss of the foveal depression is usually appreciated. These findings are best observed using a fundus contact lens, and red-free light may aide in demonstrating cystic changes. In severe or chronic cases, optic disc swelling and/or a lamellar hole may also be seen. Splinter hemorrhages may also be present. In others, the findings may vary from an altered foveal reflex to a honeycomb appearance at the macula. Many patients have coexistent inflammatory signs.

Fundus fluorescein angiography is the diagnostic procedure of choice in case of doubtful clinical CMO. Findings may vary from a mild leakage to a full-fledged flower petal appearance at the macula. The macular findings are associated with leakage from the optic disc. Visual function does not correlate well with the severity of clinical or angiographic changes.22 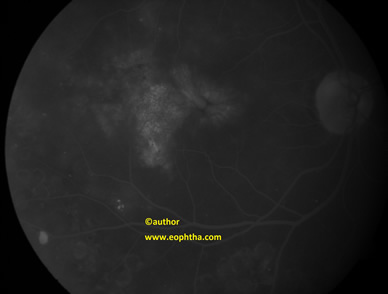 Angiographic CME is detected by fluorescein angiogram (FA), and it is often not seen on clinical examination of the eye. Clinically significant CME is observed on biomicroscopic examination and detected on fluorescein angiography. Therefore, angiographic CME is more common than clinical CME.
OCT allows high-resolution cross-sectional imaging of the macula. The new spectral-domain OCT systems are capable of detecting subtle changes in macular anatomy that has enhanced our abilities to diagnose and monitor disease activity. However, OCT has not replaced FA as the gold standard in diagnosing pseudophakic CME, because FA can also rule out other causes of CME such as diabetic macular edema and retinal vein occlusion

The exact cause of CMO remains unclear. Irvine 1953 attributed it to the incarceration of vitreous in the anterior segment and consequent vitreo-macular traction.23 This has led investigators to manage CMO with pars plana vitrectomy or neodymiumyttriumaluminum-garnet (YAG) vitreolysis. The pharmacologic agents used to combat the inflammation and CMO are topical and periocular corticosteroids and non-steroidal anti-inflammatory drugs (NSAIDs). Topical NSAIDs have been used since the 1970s both pre- and postoperatively to prevent and treat CMO following cataract surgery.
The incidence of PCME has declined with the advent of modern surgical techniques. PCME prophylaxis with topical nonsteroidal anti-inflammatory drugs remains unproven because long-term visual outcomes and comparative effectiveness studies are lacking.
Chronic, refractory CME remains a therapeutic challenge, but investigational therapies with potential include corticosteroid intravitreal injections and implants, and intravitreal anti-vascular endothelial growth factor treatments.

NSAIDs only inhibit the production of prostaglandins and do not address those already formed, thus a surgeon will often prescribe NSAID eye drops to the patient for several days before cataract surgery to lower the risk of developing CME. If CME does develop after cataract surgery, the eye surgeon might still choose to prescribe NSAID eye drops in an attempt to treat the condition. Since NSAID eye drops can enter the eye at higher levels than their oral counterparts, NSAID eye drops seem to work better than oral NSAIDs.24
In patients with pre-existing uveitis, control of inflammation with topical and/or systemic therapy for 3 months preoperatively continues to be important in lessening the risk of postoperative inflammation and complications.At the 2006 Association for Research Vision and Ophthalmology Annual Meeting, Dr. Rho presented findings from his study comparing bromfenac (Xibrom), diclofenac (Voltaren) and ketorolac for the treatment of post-cataract CME. He found that bromfenac dosed twice daily was as efficacious as either diclofenac or ketorolac dosed four times per day. The data indicate that for the 85 patients currently enrolled in the study, for the bromfenac treatment group, the average letters gained on the ETDRS chart was 15.1. For diclofenac it was 10.9 and for ketorolac it was 11.1. 25
Oral carbonic anhydrase inhibitors (CAIs) may be considered in refractory pseudophakic CME. CAIs are thought to improve the pumping action of the retinal pigment epithelium, to decrease intraretinal fluid. Encouraging results have been reported in small series and case reports, but their use is may be limited by a severe side effect profile.26

Corticosteroids appear to interact with the prostaglandin mechanisms that cause inflammation as well, so steroid eye drops can be used along with the NSAID eye drops. If topical medications do not improve the condition in a few months, we may decide to inject a dose of steroids. Periocular corticosteroids have been shown to be effective for pseudophakic CME refractory to topical treatments.
Thach et al. demonstrated in a series of 48 patients with refractory CME, that sub-Tenon’s injections improved visual acuity from 20/92 to 20/50 (P = 0.0001), and retrobulbar injections improved visual acuity from 20/97 to 20/58 (P = 0.035), and there was no statistical outcome difference between the two techniques.27More recently, Randazzo and Vinciguerra reported improved anatomic and visual outcomes in a patient with chronic PCME treated with sub-Tenon betamethasone 4 mg.28
Anti-vascular endothelial growth factor (VEGF) therapy efficacy is being tested with promising results in CME, including DME and pseudophakic CME. For patients with CME that does not improve, surgical management includes Laser Vitreolysis, Pars Plana Vitrectomy.