In early days, since the whole lenses were readily available from intracapsular cataract surgery, so the early systems of cataract classification1,2,3 were developed for use almost exclusively with isolated lenses. These systems were largely qualitative, and they emphasized nuclear color as the index of the severity of cataract formation; lighting systems that improved visualization of cortical and subcapsular morphologic detail had not been developed.
Before 1976, lens and cataract research emphasized studies of animal lenses, and researchers erroneously believed these animal lenses to be adequate models of the human lens. In 1976, the CCRG was established to increase understanding of the mechanisms of human cataract formation. One of the CCRG's goals was to establish a lens classification system to help lens researchers study the biochemical and biophysical properties of the cataractous lens and compare them with those of normal lenses. Such a system would facilitate biochemical, biophysical, anatomic, and pathologic correlations.
The first comprehensive classification system was introduced in 19784 and adopted by the American CCRG in 1980.5 The system divides the lens into two distinct zones: the cortex and the nucleus. The cortex is further subdivided into six anatomic zones: subcapsular anterior (SCA), subcapsular posterior (SCP), anterior cortical (CXA), equatorial cortical (CXE), posterior cortical (CXP), and supranuclear (SN), a zone found between the cortical and the nuclear zones.6 The nuclear (N) region is not subdivided. Subscripts are added to the classification terms to indicate the extent or intensity of involvement in that particular region of the lens. For CXA, CXE, CXP, and SN, each zone is subdivided into four quadrants, and the total extent of opacification, even if scattered throughout the zone, is expressed in terms of the number of quadrants that are totally opacified; these are denoted by subscripts 1 to 4. For SCA and SCP, the extent of opacification is estimated by comparing the opaque zone with the area within each of a series of concentric circles,7representing opacification of 3, 4, 25, 44, 69, and 100% of the area of the equatorial circle of the lens. The percentage of the total area involved is denoted as a subscript. Although the CCRG classification system was designed primarily for use on extracted lenses; it proved useful to some ophthalmologists for in vivo classification.

The constant need for a valid and reproducible system for in vivo cataract clasfication system was felt by many ophthalmologists and several publications emphasized the need for the same.8,9,10 One of the earliest challenges was to generate good photographs of cataracts that might serve as reference standards. Once standards were available, it was necessary to assess the reproducibility of newly developed cataract classification systems.

Investigations turned to photographic techniques that yielded nearly artifact-free hard copy of retroillumination and slit images of cataracts. With these images, interobserver and intraobserver consistency could be measured easily. The photographic images that proved most useful to lens classifiers were Topcon SL-45 Scheimpflug black-and-white slit images, Neitz CTR retroillumination images, and Zeiss color slit images of the lens. With the advent of digital imaging technology, the Scheimpflug and retroillumination optics were incorporated into two digital camera systems: the Nidek EAS-100011 and the Marcher Industries Case-2000.12. Both these instruments characterize the severity of nuclear cataract in terms of nuclear density and cortical and posterior subcapsular cataract in terms of the percentage of the area that is opaque (the image is binarized into a clear zone and an opaque zone on the basis of a threshold set either by the instrument or by the examiner). These digital instruments, aside from being elegantly designed and produced, are very examiner- and subject-friendly. They also allow one to avoid using film, with all the needs for standardization of development, storage, and analysis, and use electronic image storage, analysis, and data manipulation.

Several similar in vivo cataract classification systems have been developed.13 14, 15, 16, 17, 18, 19, 20, 21, Each system uses standard photographs that represent boundaries between different degrees of opacity. By comparing the patient's lens under defined lighting conditions with the standard photographs, a trained observer can define the type and extent of opacity in each lens zone. Systems differ not only in the number of photographs in each class of standards but also in the features that are emphasized as defining age-related cataract. For example, the LOCS II system employs one nuclear color standard and five cortical, four posterior subcapsular, and four nuclear opalescence standards.12 The LOCS III system employs six nuclear standards for color and opalescence grading and five standards for cortical and posterior subcapsular grading.7 The Wilmer system uses four nuclear standards but does not grade color.14,19 The Oxford system isolates and grades features that are included in the general categorycorticalin LOCS..22 The Oxford system grades nuclear color change but uses a set of Munsell color chips rather than images of nuclear cataract. The Japanese system developed by Sasaki and colleagues offers a new set of standards for grading nuclear cataracts.20, 21.

Also developed were simple, comprehensive, and standardized classification and grading systems for use at the slit lamp. A classifier trained in the LOCS system, e.g., could classify patients' lenses at the slit lamp or in standard photographs using essentially identical criteria.

LENS OPACITIES CLASSIFICATION SYSTEMS I, II, AND III
The most widely used classification system in the United States is the Lens Opacities Classification Systems I to III, which has been used in several national and international collaborative projects. LOCS uses a reference set of standard photographs that defines theextentof opacification in the cortical (C) and posterior subcapsular (P) zones, and theintensityof nuclear opalescence (NO) in the nuclear zone. Also in LOCS, nuclear color (NC) is graded separately from opalescence.
LOCS I was originally designed for use in a case-control study of risk factors for age-related cataract sponsored by the National Eye Institute.14 Recruited for the study were patients with cataract and control subjects without cataract. At the time of the study visit, the ophthalmologist had to classify the type and severity of all lens opacities. These classification data and other epidemiologic information were used to identify risk factors for specific types and extents of cataract.23 In LOCS I, an ordinal scaling ranging from zero (no opacification) to 2 (definite opacification) for each class defines the severity of opacification or intensity of brunescence. A grade of zero implies the absence of lens opacities; a grade of 1 implies the presence of early opacification; and a grade of 2 implies definite cataract. Because of the high frequency of minor, age-related cortical lens changes, the system subdivides early cortical opacification into 1a and 1b classes. The category 1a includes minor, clinically insignificant opacification; the category 1b includes early cortical cataract.
The boundaries between the gradings are defined by a set of standard photographs, consisting of one slit-lamp color photograph used to grade nuclear opalescence and nuclear color and three black-and-white retroillumination photographs used for posterior subcapsular and cortical classifications. The standard photographs are reproduced on an 81/2- by 11-inch transparency and placed on a light box located at eye level behind the patient's right shoulder when the patient is seated at the slit lamp. The classifier can easily refer to the standards during the examination, which is done with the patient's pupils maximally dilated.
LOCS II is an expanded version of LOCS I, designed to further differentiate among the various degrees of cortical, subcapsular, and nuclear opacification.12 It was also designed for use in longitudinal studies. Colored standards are used, and the number of reference standards is increased. LOCS II uses four nuclear standards for grading nuclear opalescence, five cortical standards, and four subcapsular standards. The standards demarcate boundaries between grades.

Nuclear color (NC) is graded by comparing the color of the posterior cortical–posterior subcapsular reflex to the nuclear I (NI) standard, which is the same standard as in LOCS I. The biomicroscopist uses the low-magnification view of the slit lamp with the slit beam oriented approximately 45 degrees to the patient's visual axis, and the slit height and brightness are set to equal those in the standard photograph. If the color is less yellow than the standard, the nuclear color is graded zero; if it is similar, it is graded 1; and if it is darker yellow, it is graded 2.
In grading nuclear opalescence (NO), the classifier estimates the average opalescence of the nucleus (the overall density of the entire lens enclosed within the zones of supranuclear scattering) and determines whether it is equal to or less than a specific nuclear standard. For example, if the average NO is more than the N0 but less than or equal to the NI standard, the grade is NI.
When grading a cortical (C) or posterior subcapsular (P) opacity, the grader estimates whether the aggregate area of such an opacity is less than or equal to the aggregate area of the opacity in a particular standard. The classifier envisions an aggregate opacity by clumping all contiguous and noncontiguous opacities into one zone. The size of the opaque zone relative to the size of the opaque zone in the standards determines which class is chosen to grade the cataract. In the LOCS classification scheme, the cortical and posterior subcapsular zones are graded individually as C and P. The C zone includes the subcapsular anterior, cortical anterior, cortical equatorial, cortical posterior, and supranuclear zones of the original American CCRG in vitro classification scheme; the P zone includes the subcapsular posterior zone. The classification data are recorded on a form that contains guidelines for classifying each type of opacification

The Wilmer system uses four nuclear standard photographs for grading nuclear opacity.14, 19 The gradings are based on three criteria: visual acuity, density, and extent of the opacity. presents the nuclear standards 1 to 4, and illustrates the nuclear opacity grading definitions.14 The nucleus is examined with a thin slit beam that passes through the center of the lens, and the clarity of the optical section of the nucleus is compared with the standard photograph and graded accordingly. The cortical and posterior subcapsular opacities are examined using retroillumination. Only opacities that could be seen in retroillumination are graded by estimating the proportion of the total circumference of the lens occupied by the combined cortical opacities as if they are adjacent, gives the cortical opacity grading definitions. 14 The posterior subcapsular opacities are assessed by determining the overall vertical and horizontal dimensions measured using the calibration of the slit-beam height. These dimensions are then multiplied to give an approximation of area. Intraobserver and interobserver agreements are good, with the exception of the interobserver agreements for posterior subcapsular cataracts. 14 The Wilmer system has been used in studies by Adamsons and colleagues and Taylor and associates.15,16,17,18

There had been so many classification systems with their own merits and demerits so in an attempt to unify the methods of grading age-related cataract and produce a simplified version of present grading systems, the WHO in 1996 convened a meeting of most of the clinicians and epidemiologists with cataract classification expertise. The charge to this group was to design, implement, and validate a new system of classifying age-related cataract using the strengths of the existing systems of cataract classification. This goal has been largely achieved and at present this system is undergoing field testing in Australia. When testing is completed, test results and details of the system will be published.
Recent Attempts at Classification Of Cataracts

Another study published in Ophthalmology in 200926 also proved the correlation of LOCS III with pentacam Schiempflug imaging system. 110 patients were enrolled in the study and it was found out that certain areas of nucleus are more representative of the lens density on schiempflug imaging (region of interest), and that these areas correlated with the LOCS III, whereas the Average Lens Density measurement on Pentacam did not correlate with the LOCS III standards. (Figures 1-3) 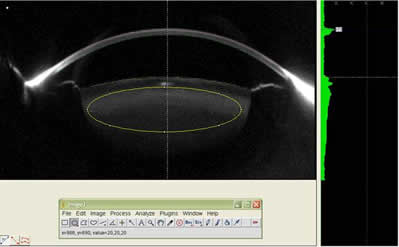 Figure 2: The figure shows a Region Of Interest(ROI) being measured with the help of ImageJ software 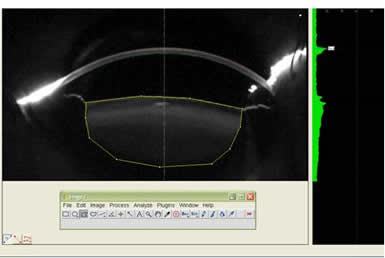 Figure 3: The figure shows Average Lens Density being measured with the help of ImageJ software

1. Pirie A: Color and solubility of the proteins of human cataracts. Invest Ophthalmol1968; 7:634