Zonular compromise complicates every step of cataract surgery and poses a serious challenge in terms of safety and visual outcome. When the lens is displaced from its normal position, it is considered subluxated if it remains in the pupillary area and luxated or dislocated if it is completely displaced from the pupil.Ectopia lentisis the term used to describe congenital dislocations.1Lens displacements may be traumatic, heritable, and spontaneous.( Table 1)

The adoption of new devices and techniques that minimize the stress on compromised zonules have gained acceptance over older approaches like iridectomy, laser iridotomy and intracapsular cataract extraction. The contemporary techniques of management shall be discussed at length.

The lens is suspended in its anatomic position by ciliary zonules (zonules of Zinn or suspensory ligament of Zinn) which consists of fibers which run from ciliary body and fuse into the outer layer of the lens capsule around the equatorial zone. The bundles that insert into the anterior capsule are stronger than those that insert in the posterior capsule. The insertion of zonules extends 1.5 mm anterior to the equator and 1mm posterior to it. Each zonule measures 5 to 30µm in diameter and is composed of bundles of microfibrils. Biochemically they are composed of fibrillin, a protein product of the gene linked to Marfan’s syndrome.

A detailed ocular examination is mandatory. Both near and distant BCVA should be determined, keeping in mind that the patient may best see with an aphakic correction if the lens is markedly subluxated. The exact degree of zonular loss, location of defect and presence or absence of vitreous in the anterior chamber should be noted. Ultrasound biomicroscopy and anterior segment OCT, are especially useful for zonular and angle assessment in patients where the pupil fails to dilate. An inferior subluxation often indicates 360 degrees of zonular insufficiency combined with the effect of gravity. Gonioscopy is performed to note any developmental defects, pseudoexfoliative material and deformities secondary to trauma or as a sequlae to subluxation. The fundus examination is done to look for lattice degeneration, cyclitic membranes, retinal detachment or posttraumatic pathology. Retinal detachments occur in 10% eyes with Marfan’s syndrome and Homocystinuria.2 Bscan ultrasonography is indicated in opaque ocular media.(Figure 1) Presence if any of uveitis, glaucoma, corneal edema and amblyopia should also be ascertained. Besides the routine systemic examination, conscious efforts are directed towards detection of any cardiovascular abnormalities especially in Marfan’s syndrome and Homocystinuria. Depending on the degree of subluxation the surgical procedure is chosen. (Table 2) In 1991, the CTR(capsular tension ring) was introduced by Dr Hara and subsequent studies demonstrated that CTR could provide both intraoperative and postoperative stabilization of capsular bag and IOL.3These PMMA rings can be inserted anytime after the capsulorrhexis has been completed.4In patients with profound and progressive zonular loss , Osher described the technique of suturing CTR to the scleral wall by straddling the CTR with a 10,0 prolene suture, double armed with CIF-4 needles.5This procedure involved the risk of rupturing the bag. The modified CTR(MCTR), designed by Dr Robert Cionni, incorporates a unique fixation hook to provide scleral fixation without violating the integrity of the capsular bag.6The MCTR consists open, flexible PMMA filament with a fixation hook that loops anteriorly and in a second plane wrapping around the capsulorrhexis edge. At the free end of the hook is an eyelet through which a suture can be passed for scleral fixation. Depending on the extent of subluxation single or double loop models can be chosen.( Figure 4)The MCTR has shown to provide a good centration of capsular bag.7 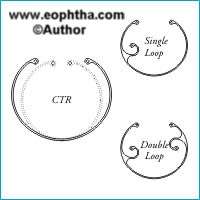 A peribulbar anaesthesia is preferred. Smallest possible incision depending on the surgeon’s ease should be used. Phacoemulsification has an edge over manual small incision surgery(MSICS) but care should be taken in more than 1800 subluxation where MSICS may be easier. All the steps are performed keeping in mind the site of subluxation. (Table 3)

After the initial incision, a high molecular weight viscoelastic is injected over the area of zonular dialysis to tamponade the vitreous and maintain a deep non-collapsible anterior chamber. The capsulotomy should be large enough to allow easy manipulation of the nucleus and should be started away from the site of subluxation. (Figure 5) A 5.5 -6 mm for phacoemulsification and 6.5 mm for MSICS is usually adequate. Fig 5: Capsulorhexis is started away from the site of zonular dehiscence.

In most of the patients, the nucleus is not very hard and once the nucleus comes in the anterior chamber there is little difficulty in its final delivery. In smaller subluxations, any technique namely Blumenthal`s, microvectis, phacosandwich or phacofracture can be used. In more than 180 degree subluxation or generalized zonular weakness Blumenthal’s technique is not preferred because the fluid through the anterior chamber maintainer(ACM) may further compromise the remaining zonules. Also while using the ACM, the site of insertion at the limbus is changed according to site of dehiscence so that it does not lie over the area of weak zonules. No attempt should be made to perform the capsulorrhexis under fluid through ACM as it becomes difficult to control.
Fish hook technique, where the nucleus is engaged with the hook on its undersurface with the inferior pole still in the capsular bag can be dangerous in cases of inferior zonular dehicense.

CTR/MCTR can be inserted into the capsular bag at any point after the capsulorrhexis; however the bulk of the nucleus can make visualization and placement of the CTR
difficult. Also in MSICS, the fixation hook of MCTR obstructs the nuclear delivery out of the bag into the anterior chamber especially the model with double loops.
The CTR is inserted using forceps or a specially designed injector. A ‘fish –tail’ technique can also be used to insert the CTR where both its ends are held with the forceps in a crossed manner to create a central closed loop which is placed adjacent to the area of dehicense in the capsular bag first. This is followed by release of each end at a time and manipulation of the entire device into the bag.( Figure 6) MCTR needs to be fixed to the sclera using either an ab-externo or an ab interno approach with single or double armed 9,0 prolene suture on CIF-4 needles. The 9,0 prolene is preferred over 10,0 prolene with the recent reports of biodgradation of 10,0 prolene. 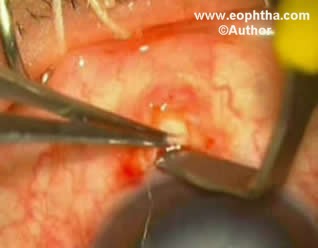 Fig 8: A CIF -4 needle passed 1.5 mm from limbus at the scleral bed to emerge from the main wound. The authors prefer an ab –externo approach. A partial thickness scleral flap is dissected at the fixation site. ( Figure 7) The CIF-4 needle is passed 1.5mm posterior to the limbus through the scleral bed to emerge from the main wound and tied to the fixation hook.( Figure 8 & 9) In case of larger subluxation, where double loop device is used, two scleral flaps are prepared 180 degrees apart and prolene is passed as earlier and tied to the other fixation hook. The MCTR is inserted with smooth forceps through the main incision and dialed into the capsular bag.(Figure 10) The Y- hook can be used to "dial" the MCTR until the eyelet is centered adjacent to the partial thickness scleral flap. An anchoring knot is placed adjacent to the exiting 9,0 prolene suture using 10,0 nylon and the prolene is tied to it. The curved needle on 10,0 nylon is then used to take a bite from undersurface of the scleral flap which when pulled covers the mesh of sutures. ( Figure 11 & 12) Fig11: The anchoring suture is placed adjacent to the exiting prolene suture Fig12: A bite is taken from undersurface of the scleral flap

Alternatively, using a double-armed 9,0 prolene suture, two passes are made from each scleral bed, which is tied to the fixation hook and the two prolene ends emerging 1.5 mm apart and posterior to limbus are tied to each other. The knot is then rotated to be buried into the sclera and covered by conjunctiva.

When using an ab –interno approach the prolene is first tied to the fixation hook eyelet and then the CIF-4 straight needle is passed through the main wound to emerge from the the scleral bed. The emerging prolene sutures are dealt as described earlier. Fibrin glue can be used to reposition the scleral flap and the conjunctiva as in scleral fixation.8

In this case a space is created between the peripheral capsular bag and remaining lenticular material with viscoelastic so as to prevent entrapment of cortex under the CTR. If the CTR is placed before phacoemulsification, a "safety-suture" (10.0 Prolene) is looped through the leading eyelet. This suture is left trailing out of the incision and can be used to retrieve the CTR in the event of a posterior capsular rent or if the CTR is difficult to place, this suture can be used to help "coax" the leading haptic around the capsular bag periphery.

Once capsulorrhexis has been completed, if one plans to extract the nucleus prior to capsular tension ring implantation, if there is moderate subluxation, the capsular bag should be stabilized with iris retractors placed through limbal stab incisions.( Figure 13) Fig13: The bag is stabilized with iris retraction hooks.

Hydrodissection is then performed gently, yet thoroughly, to maximally free the nucleus and thereby decrease zonular stress during manipulation of the nucleus. If the nucleus is soft, supracapsular phacoemulsification will virtually eliminate zonular stress.
Phacoemulsification should be performed using low vacuum and aspiration settings in order to keep the bottle height and flow rate at a minimum.9Chop techniques are preferred for the dense nuclei to minimize zonular stress during phacoemulsification.
Cortical viscodissection prior to aspiration will also limit the stress on remaining zonules.10The cortex should be stripped along a vector tangential to the capsular bag periphery to decrease the risk of further damaging the zonules.
The cortical entrapment can be prevented, by injecting the viscoelastic just under the surface of the residual anterior capsular rim before inserting the CTR or MCTR. This will create a space for the ring and dissect the residual cortex away from the peripheral capsule.
Once the CTR/MCTR has been placed appropriately, the posterior chamber intraocular lens (IOL) is inserted in the bag. It is easier to inject a foldable IOL in comparison to a PMMA lens but either can be used.
If vitreous presents at any time during the procedure, it should be completely removed from the anterior chamber. Kenalog (Alcon) (triamcinolone suspension) can be used to identify vitreous in the anterior chamber. Fig15: The nucleus is removed along with the capsular bag. Fig16: The straight needle with 10,0 prolene is docked into the lumen of 26 G needle in the posterior chamber. Fig17: The prolene is tied to the eyelets on the haptics Fig18: The IOL is inserted into the posterior chamber.

In large subluxations, where it is not possible to perform a capsulorrhexis, the nucleus is removed with its bag and a transscleral fixation of a posterior chamber intraocular lens is performed.( Figure 14 to 18)
In conclusion, CTR and MCTR have made it possible to save and recenter the capsular bag, and perform in the bag PCIOL implantation in cases of subluxated cataracts revolutionizing the approach to subluxated cataracts. However, in cases of generalized zonular weakness and dehicense 270 degrees or more, intracapsular cataract extraction followed by scleral fixation of PCIOL /anterior chamber IOL implantation is a safer option for the long term stability of the IOL.